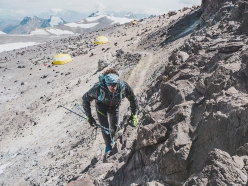 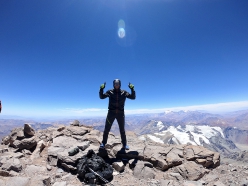 Martin Zhor on the summit of Aconcagua on 27 December 2019 after his record ascent in 3:38:17 starting from the Plaza de Mulas base camp
Photo by archive Martin Zhor 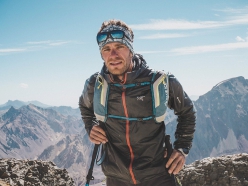 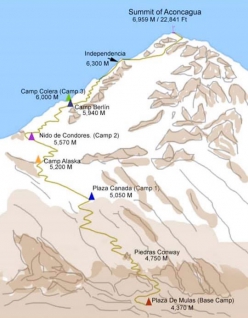 At the end of December 2019 Czech skyrunner Martin Zhor raced to the summit of Aconcagua (6962m) in just 3 hours, 38 minutes and 17 seconds. In doing so he has set a new record for the journey from Plaza de Mulas Base Camp to the top.

On 27 December 2019 Czech mountaineer and skyrunner Martin Zhor raced up Aconcagua, the highest mountain in South America, in just 3 hours, 38 minutes and 17 seconds. Starting at 10:10 am from Plaza de Mulas base camp (4400m), the Chamonix-based athlete followed the normal route and reached the 6962m summit at 13:48, setting a new fastest known time in 3:38:17.

The 38-year-old Czech stopped the clock at the top and then descended at a decidedly less demanding pace. This was Zhor’s third ascent of Aconcagua in December: on the 17th he ascended the mountain having departed from Plaza Argentina BC, while on the 24th he set off from Plaza de Mulas and required 4 hours and 38 minutes. After 3 days rest and significantly more acclimatised, he then set this new FKT.

Zhor had never climbed above 5500 meters before his Aconcagua experience. He told planetmountain.com "On the record day I used lightweight gear: merino t-shirt, light Goretex jacket, softshell pants and running shoes. There was only light wind and around -10°C at the top. Aconcagua is very dry this year, most of the route is a loose scree and rocks with some snow above 6000m."

The new time is extremely similar to the previous record set at the start of millennium by three legendary mountain runners, Bruno Brunod, Fabio Meraldi and Jean Pellisier, who in February 2000 required 3 hours, 40 minutes and 20 seconds for the ascent, starting from nearby Rifugio di Plaza de Mulas instead of BC Plaza de Mulas as Zhor did. (Correction: An earlier version of this story incorrectly reported that the trio had started from base camp). It’s worth highlighting that the trio descended immediately and stopped the clock on their return after totalling 4 hours and 52 minutes.

In 2014 Spanish skyrunner Kilian Jornet Burgada required 12 hours and 49 minutes to ascend and descend the mountain, starting from and returning to the Horicones park entrance that adds a further 40 km. In 2018 Ecuadorian mountaineer Karl Egloff completed the route as Burgada in 11 hours 52 minutes.