Kilian Jornet Burgada on the summit of Aconcagua (6962m) during his record ascent and descent of 12 hours and 49 minutes.
Photo by Summits of My Life 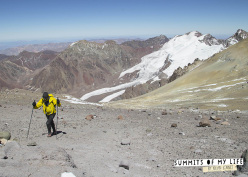 Yesterday Spanish skyrunner Kilian Jornet Burgada set a new speed record on Cerro Aconcagua, at 6962m the highest mountain not only in South America but also outside of Asia with its Himalayan giants, by ascending and descending the Andes peak in a mere 12 hours and 49 minutes.

The Catalan athlete reached the foot of the mountain at the start of December and acclimatised by running up stretches of the mountain. In doing so he gained vital knowledge of the Normal Route via which he first summited on Monday 15 December. High winds at 6200m forced him to abandon his first speed attempt 4 days later, but Burgada simply shrugged this setback off stating "I consider this failed attempt like a big training in altitude."

With lower winds forecast Burgada set off early yesterday morning from the park entrance at Horicones and after reaching Plaza de Mulas Base camp at 4400m he continued on via the Normal Route, covering almost 30km and ascending 3.962m vertical meters to reach the summit, struggling slightly with the altitude during the last 400m. He descended via the same route and completed the 59,85km roundtrip in 12 hours 49 minutes.

Commenting after his ascent, Burgada stated "I am so happy for achieving this new challenge. It was hard, especially after 6.500m where I suffered hard from altitude. At the end all those moments of joy and sufferance are the ones that we remember."

This recent success marks another stage in Burgada’s ambitious Summits of My Life project, which entails climbing some of the most important mountains in the world including Mont Blanc (2013, 4 hours 57 minutes), the Matterhorn (2013, 2 hours 52 minutes), Denali (2014, 11 hours 48 minutes) as well as Mt Elbrus and Mt Everest, both planned for 2015.