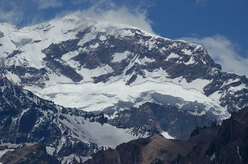 Leopold Sulovsky and Josef Lukas from the Czech republic have climbed a new route up the West Face of Aconcagua (6962m), Argentina.

Czech climbers Leopold Sulovsky and Josef Lukas have climbed a new route up the West Face of Aconcagua, at 6962m the highest mountain in South America.

Details at present are few and far between, but so far we have learned that the two experienced mountaineers spent four days climbing alpine style up the West Face after conditions on the South Face proved prohibitive.

Battling against intense cold down to -40°C they summited on 30 January, with 53 year old Sulovsky stating that they encountered difficult climbing in conditions much harsher than those on their successful 2007 ascent of K2 via the Cesen Pillar.