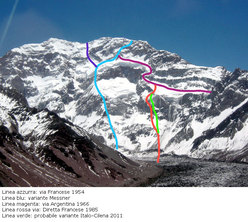 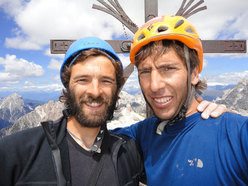 The are some mountain faces which open entire worlds to alpinists and the South Face of Aconcagua is certainly one of these. It's a journey reserved to only a few. An extremely long undertaking. More than 2000m vertical height gain through an immense and difficult sea of rock and ice. To which must be added the altitude which renders Aconcagua the highest peak in the eastern hemisphere and the highest outside of Asia. And one mustn't forget the fact that 6962m in the Andes feel much higher than the same altitude in the Himalaya. Aconcagua obviously has an important mountaineering history which includes the era of the first ascent at the hands of the 1954 French expedition, the variation along the same line established in 1974 by Messner and the difficult direct route chosen in 1982 by the Slovenians, as well as the other lines (not many to tell the truth) which are all important. It is for this reason that the recent ascent by Andrea Di Donato (30-year-old Mountain Guide from Teramo, Italy) and Andres Zegers (41-year-old alpinist from Chile) cannot be ignored. No, must be applauded! Not only because they probably established an 800m new variation start to the right of the 1985 French Direct, but also because of the spirit and the impeccable alpine style of their 50-hour and 2 bivy beautiful adventure.

It all began on 4 December with Di Donato's departure from Italy and attentive readers will remember that in the past the young Italian carried out two important climbs which we reported about: the first winter solo ascent of the North Face of Camicia and the first winter ascent of Fulmini e Saette (together with Andrea di Pascasio and Lorenzo Angelozzi) on Gran Sasso. After meeting up with Andres Zegers in early December, the duo first acclimatised by climbing Cerro Mercedario. This immense 6770m peak in the Cordillera de la Ramada was summited on 15 December along with Aike Parvex and Ulrich Ehrlenspiel. The adventure then began in earnest and on 19 December they reached Plaza Francia Base Camp. Three days later, at 17:00, they were at the foot of the South Face of Aconcagua. Their plan was simple: they had identified an obvious icefall to the right of the 1985 French direct and they climbed this. The first 250m proved the most demanding with difficulties up to WI 4. The line then continued autonomously, 800m in total (from 4600m to 5400m circa). is this a new variation? Di Donato states clearly: "I didn't find any information about this, but I can't be 100% sure, the line is too logical!" We need to add that we too failed to find news about other ascents, which makes it probable that theirs is a new variant.

Regardless of this though, the two spent their first bivy on a snow slope at 5400m. From here they set off the next day and followed the French Direct (max 60°) to an altitude of 5600m and then breached the Upper Glacier via the 1966 "Pasic" or "Routa Argentina". The second night was spent at 6200m, still on the Upper Glacier but immediately beneath the spur of the 1954 "Routa Francese". On 24 December they continued up this to 6700m where, at 17:00, the reached the knife-edge crest. They summited at 19:00 and then descended via the normal route... A great undertaking and a "chapeau", hat's off ascent. For the record, Andrea Di Donato is the second Italian after Messner to have climbed the South Face of Aconcagua.

"This face" Di Donato told planetmountain "symbolised an internal battle against my fears, fears which clearly tended to distance me from our objective. Although it may seem fairly short, the waiting game before the start transformed into a sort of wait at the gallows. And my relative inexperience at altitude fuelled doubts as to whether I would be able to climb a nearly 7000m high peak with its 2800m high face in alpine style. The battle served to recognise and fight this mental transposition which had stemmed from fears more imagined than real. Once we began the ascent everything changed and the climb beneath those enormous ice formations became fascinating. On the whole there were only some very short sections when we were really exposed. Everything went extremely smoothly but we really felt the rock sections right at the end, above 6500m. And crossing the Bergschrund to access the French spur was by no means simple. We found the right line up the spur (an error here would have resulted in another bivy) and above this orientation proved simple, the lines are very obvious."

All is well which ends well therefore, except for the camera and small video camera which documented the ascent and which was forgotten in a taxi in Santiago in Chile... spread the word, you never know! Before finishing, we recommend you read Andrea Di Donato's diary and report of the adventure... it really is worth it. Trust us.


Andrea Di Donato thanks: "The shop Campo Base in Roma and Ferrino which provided me with excellent clothes tested in extreme conditions."