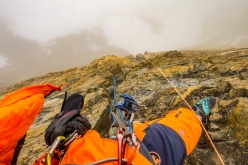 Dani Arnold and Stephan Ruoss on the summit of Gross Grünhorn 4044m, Switzerland onl 12/05/2018 after having made the first ascent of Exile on Main Street
Photo by archivio Dani Arnold 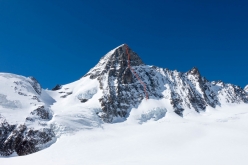 Mountaineering in the Bernese Oberland, Switzerland: on 12 May Dani Arnold and Stephan Ruoss made the first ascent of Exile on Main Street, a 600 m line up Gross Grünhorn (4044 m).

An unclimbed big wall in the Jungfrau region, close to the white maiden of the Swiss Alps? Impossible is the answer that immediately springs to mind seeing how many alpinists visit this part of Switzerland every year. But it’s true. Or rather, it was true until 12 May when Dani Arnold managed to climb a new route up Gross Grünhorn with Stephan Ruoss .

Acting on a tip off from his friend Christoph Blum - initially the 34-year-old thought it was a joke - Arnold checked out the mountain in March 2017 with Mario Walder but the two turned back before even reaching the base due to too much snow. He returned this May with Stephan Ruoss and after setting off from the Finsteraarhornhütte at 3048m the two climbed their Exile on Main Street, 600 meters with difficulties estimated at M7, 6b+.

The two mountain guides added bolts to the belays to facilitate the descent and apart from 3 pegs left insitu, they used trad gear to protect the climbing on the individual pitches. "Like this" concluded Arnold "those who repeat the route will have their own adventure."