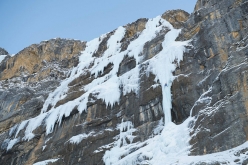 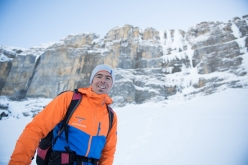 On 24 December 2017 the 33-year-old Swiss alpinist Dani Arnold made a free solo ascent of the icefall Beta Block Super up the Breitwangfluh above Kandersteg in Switzerland.

Ace Swiss alpinist Dani Arnold has made a not-to-be-copied free solo ascent of the outstanding ice climb Beta Block Super up the Breitwangfluh above Kandersteg in Switzerland. In 2014 Arnold had made a ropeless ascent of the nearby classic testpiece Crack Baby, while on 24 December 2017 he set his sights on the somewhat harder, nigh 300 meter-high WI7 drip.

Accompanied by friend and photographer Valentin Luthiger, 33-year-old Arnold took with him a small rucksack containing a rope, a harness, some carabiners and ice screws for the descent. He had never climbed the route beforehand. His time of 1 hour and 3 minutes is published out of duty to report and certainly not to further emphasise an activity that simply cannot be measured with a stopwatch.

After his ascent Arnold wrote "Why did I do this? One of the hardest and most dangerous climbs in the Alps, climbed without a rope a so quickly? It’s hard to find an answer and even now, a few days after my ascent, I still really don’t know why. One thing is certain though: doing it one day was my huge goal and dream. I don’t want to downplay the risk and the enormous danger, I also love my life. But I also love my dreams and ideas. And that's why it was important to me and I'm proud of it. Full stop."

Asking himself questions about this climb and how it compares to his first ascents across the Alps and in the Greater Ranges, and to his astounding speed records up the Matterhorn in just 1 hour and 46 minutes in 2015 and the North Face of the Eiger via the classic Heckmair route in 2 hours and 28 minutes in 2011, Arnold concluded: "This project is of utmost importance to me. I love ice climbing. And this isn’t just yet another record, but an absolute highlight. I’ve made one of my biggest dreams come true. The world obviously hasn’t changed as a result. And my life and the joy I get from taking to the mountains is unchanged. And that’s good, because what’s really important is to be healthy, happy and content!"