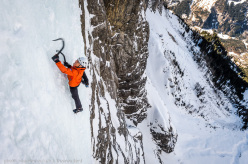 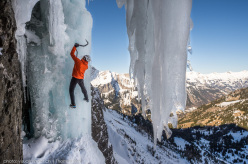 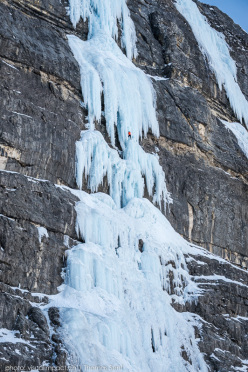 On Sunday 9 March Swiss alpinist Dani Arnold solo climbed Crack Baby up the Breitwangflue in Switzerland in a mere 27 minutes and 13 seconds.

We heard the news immediately after the ascent but, to tell the truth, we didn't know how to publish it. On 9 March 2014 Dani Arnold from Switzerland climbed - without ropes and in less than half an hour - Crack Baby, the astounding line up pure ice that drops down the Breitwangflue high above Kandersteg, first ascended back in 1993 by Xavier Bongard and Michael Gruber and now one of the most famous and sought after ice climbs in the world. To be precise, the time needed for the solo was 27 minutes and 13 seconds. We could have simply published the news, added the photos and video and moved on. But we failed to do so. Because we didn't know, and perhaps even now still don't know, what this solo race up these 340m really means. For Arnold, and for anyone else.

In the meantime we asked ourselves who Arnold is. And we tried to find the various pieces of the puzzle. So here they are, strewn across the table if you wish, all mixed up. And if you try and put them together perhaps they'll create a picture that is both beautiful and fascinating. But also damn dangerous and at the limit of what is feasible and conceivable.

Arnold is a mountain guide by profession. A classic guide, someone who more often then not is out in the mountains with a client, and that's why one doesn't hear about him all too often. And he's also a man of little words, one of those types who prefer to let their climbs speak for themselves. Like his speed record up the Eiger. And also like his first winter ascent of Torre Egger in Patagonia, or last year's first ascent of a difficult mixed route up Mooses Tooth in Alaska together with David Lama. In short, a pretty impressive curriculum that gets bigger every year.

As a young lad Arnold grew up on a farm in a fairly remote valley in Central Switzerland. To get to school he had to walk, first down and later up the slope in front of his house. A steep slope, it goes without saying. This is probably the basis of his immense physical strength and this also explains why he has such strong ties with nature. As a junior he even made it into the sought-after national snowboard team, but he soon realised that what interested him most was experiencing the mountains from all angles and perspectives. Which for Arnold often translates into a very quick experience indeed.

In 2011, not even a year after the first winter ascent of Torre Egger together with Stephan Siegrist and Thomas Senf, Arnold astounded all with his solo ascent of the Eiger North Face. The classic Heckmaier route in a mere 2 hours and 28 minutes. An absurdly fast time, that crushed the apparently unbeatable record set by Ueli Steck. But Arnold's time certainly didn't come from out of the blue: few know that before starting his stopwatch, he had turned back from the start twice since conditions, and his sensations, weren't right.

Arnold's curriculum also contains the Trilogy up the Breitwangflue. Flying Circus, Mach 3 and Crack Baby climbed in a single day, 650m of difficult ice and mixed. A true marathon, climbed together with Walter Fetscher and Renato Gisler one cold day in January 2013. But this did nothing other than pave the way to his most recent feat. Was it possible, Arnold asked himself that day, to climb Crack Baby even faster? And if so, how fast?

Now, at the start of March, the time had come find out more. Or almost, because on Saturday 8 March there were too many people on the Breitwangflue, too much hustle and bustle for the Swissman. So Arnold repeated Crack Baby with friend and photographer Thomas Senf, stashed his rope and harness at the top and descended back down into the valley. But in checking out the route he realised that the icefall was in perfect conditions, that this was the moment he'd been waiting for. And on Sunday morning, alone and at breakneck speed, the 30-year-old found the answer he'd been looking for. In 27 minutes and 13 seconds.

Impossible. It's a word we often deal with. But not so Arnold. And not so others like him, such as for example Ueli Steck, Hansjörg Auer and Alex Honnold to name just three of the leading lights of today's unthinkable. Climbers, alpinists, athletes - call them as you wish - fully aware of the immensely high risks they take. And yet 100% certain of themselves and their capabilities. Unfortunately history shows that, at times, not everything goes as planned. They certainly know this. And they also know that all this may seem like a contradiction. Perhaps this is another small piece of the greater puzzle called alpinism.