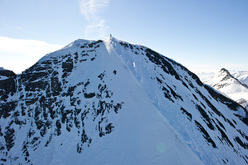 Dani Arnold on the summit of the Eiger (3970m)
Photo by visualimpact.ch | Thomas Ulrich 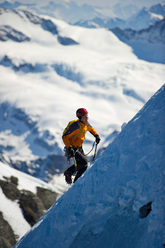 Dani Arnold during his record ascent of the Heckmair route on the Eiger.
Photo by visualimpact.ch | Thomas Ulrich 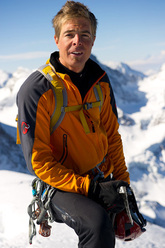 On 20/04/2011 Dani Arnold from Switzerland climbed the Heckmair route up the North Face of the EIger in 2 hours 28 minutes, setting a new speed record up this historic line.

On Wednesday morning 27-year-old Swiss alpinist Dani Arnold climbed the historic Heckmair route on the Eiger North Face in an almost unimaginable fast time: 2 hours 28 minutes. Arnold started running the clock on the first ledge at 9:05 and, after having overtaken circa 20 teams including Swissman Simon Anthamatten with a client of the "Traverse of the Gods", reached the summit at 11:33. With this new time Arnold has now beaten the previous record set by Ueli Steck who in February 2008 raced upwards in 2:47:33.

Arnold climbed on Wednesday morning for the "pure pleasure of climbing the route quickly." He knew the route seeing that he had climbed in once previously, but this was his first solo and prior to this recent success he had approached the base of the wall on various occasions but the inner feeling was never right, the moment was always wrong. That is, until last Wednesday.

Arnold's ascent, we must admit, has taken us a bit by surprise for various reasons. Not so much because the Swiss Mountain Guide hasn't been making headline news on a regular basis. On the contrary, we're well aware of Arnold's reputation for being an extremely fast alpinist. And of his ability to keep things together in difficult moments - read last year's first winter ascent of Torre Egger in Patagonia with Stephan Siegrist and Thomas Senf. Arnold's speed climb caught us unaware because, perhaps by mistake, we thought that the previous record would have resisted for much longer. And we didn't think it would then be beaten by almost 20 minutes...

Before finishing off and concentrating only on the time, it's important to analyse some details of the two ascents and use these as food for thought. While Steck raced up a completely empty wall, Arnold chose a moment when other teams were engaged on the route. Steck climbed the route completely free, whereas conditions were not ideal on Wednesday and Arnold resorted to aid on the Hinterstoisser traverse and beneath the exit cracks. In short, what we want to say is that it is extremely difficult to compare ascents up such a face as the North Face of the Eiger, even if the climbs are super fast like the ones performed by Steck and Arnold.

Thoughts and questions to one side... what seems evident is that these speed ascents, this supersonic variable in the game of alpinism, demonstrate clearly the truly extraordinary ability of some alpinists. Unthinkable perhaps just a couple of years ago. The real question therefore isn't who is the fastest, isn't "how" these records should be measured when the difference becomes mere minutes or even seconds, but what these super alpinists will be able to achieve when they attempt new routes up new faces... The answer, we bet, is already in their dreams.

Eiger North Face - the classic 1938 Heckmair route
The North Face of the Eiger contains numerous routes of varying difficulties. The easiest remains the classic route established in 1938. This ascends 1800 vertical meters with difficulties up to ED+: rock V-, aid (A0), and ice slopes up to 60°. Usually the climb requires between 1 - 3 days, depending on the ability of the climbers and the conditons, and in some cases even more time may be required. The route is considered extremely dangerous due to rockfall, avalanches and falling ice.