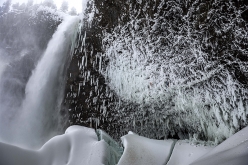 Find the ice climbers... Dani Arnold and Martin Echser lost in a sea of ice during the first ascent of Power Shrimps at Helmcken Falls, Canada
Photo by Thomas Senf 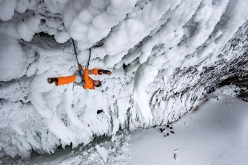 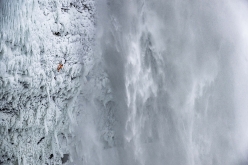 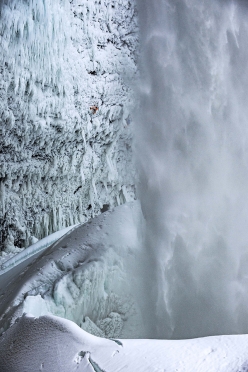 The Helmcken Falls draw is simply irresistibile. Sooner all later all of the world’s best ice climbers make their way to Canada’s "magic cave", discovered in 2010 by local climber Will Gadd and Britain’s Tim Emmett. That season the duo established Spray On, the first climb on the particular spray ice formed by the wind-born spray of the fourth highest waterfall in the country and photos of the amazing overhang, festooned with hanging drips, immediately made their way into climbing magazines worldwide.

Understandably some of the world’s best immediately travelled to the cave including the likes of Klemen Premrl and Angelika Rainer, and also Dani Arnold who - on his third trip - has now come up with his own Power Shrimps. While conditions proved prohibitive on his first two trips, now the 34-year-old has finally forged a new route with climbing partner Martin Echser that cuts diagonally across the cave, from right to left.

Protected by bolts, the first pitch of the two-pitch outing is 45 meters long and overhangs a staggering 30 meters, while the second pitch adds another 20 difficult meters. The actual climbing requires immense body tension, more than on a normal sports climb as one never knows if the ice axe placements will hold in the soft spray ice, and the runout are long at times.

Arnold chose not to grade the route, and he told planetmountain.com "Let’s just say it’s hard, beautiful and one of the highlights of my ice climbing career. Why didn’t I grade it? Well the climbing in the cave is so unique. Conditions change completely every year, depending on how the winds blow in autumn when the ice first starts to form, and so the drips that I pulled on will never be there again. And even if you have a metal detector, chances are you’ll never find the bolts. That’s just how it is here at Helmcken, and why I was so happy to finally find the right conditions. Talk about third time lucky!"

Confirmation about the route’s beauty comes from Helmcken local Will Gadd who happened to be in the cave at the same time and checked in with the second ascent. Not one to mince for words, the Canadian described Power Shrimps "one of the best ice routes I’ve ever done."

The Swiss alpinist has made hard first ascents across the Alps and the Greater Ranges, and has set astounding speed records up the Matterhorn in just 1 hour and 46 minutes in 2015 and the North Face of the Eiger via the classic Heckmair route in 2 hours and 28 minutes in 2011. At the end of 2017 he made a daring free solo ascent of the icefall Beta Block Super up the Breitwangfluh above Kandersteg in Switzerland.