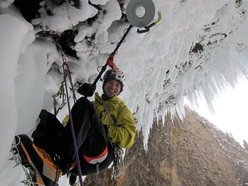 Will Gadd with metal detector, looking for the bolts on Spray On, Helmcken Falls, Canada, 01/2011
Photo by Gadd/Emmett collection 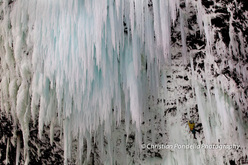 Spray On, Will Gadd and Tim Emmett return to Helmcken Falls, Canada

Will Gadd from Canada and Tim Emmett from Britain have returned to the Helmcken Falls in Canada and added a further 4 pitches to last season's Spray On.

Remember Spray On, the rather particular route climbed by Will Gadd and Tim Emmett at the massive Helmcken Falls, Canada last year? The 30m line which climbs the 45° overhang up ice formed by the spray of the waterfall? Well, this January the Canadian / British duo returned to what might well be the most overhanging ice climb in the world intent on extending the line all the way to the top. Conditions proved favourable initially - some of the icicles were up to 50 feet in length - and the two managed to climb 5 pitches to reach the lip of the overhang. However, rising temperatures thwarted plans of climbing any higher and they they wisely opted against continuing up the headwall to the top.

Difficulties were compounded by the fact that the bolts placed the previous year were hidden, embedded deep within in the ice, but Gadd is a man who leaves little to chance and had arrived armed with a metal detector. No grade has been put forward (for the record, last season's effort was tentatively graded W10) and Emmett summed up the adventurous week by stating "We climbed more out, than we did up, it's quite extraordinary being in such an environment. Swinging across the huge roof doing footless moves and fig4's with axe's in an inch of ice or less, seems so far away from the ice climbing I was bought up with in Britain. Even getting to the base we had to rope up to cross crevasses 100ft deep, it's out of this world." Like last year, we checked in with Will Gadd to find out more.

Will, tell us about progress this season
Well, roughly the bottom half of the amphitheatre is severely overhanging, then it eases up on angle. We stopped where the angle changes this year, it goes from basically all ice climbing toward more mixed climbing. I think earlier in the year you could have done more on pure ice. I'm just more interested in ice climbing than drytooling right now.

Can you envisage conditions being different?
I think that in a perfect year it would be possible to climb from the bottom of the cave to the top where the waterfall comes off the lip, all on ice - which would be a lot of climbing!

What are plans now?
We may go back next week, but we're honestly really beat up - Tim and I both have a lot of bruises, strains and just general tiredness from the effort. Cleaning icicles and bolting on that angle is very aggressive, plus it's mentally taxing. But I'm having the Helmcken Falls lodge owners keep an eye on the wall, and if more ice forms then  yeah, we go back!

Everything was bolted on lead. Tell us about the belays.
The belays are all at least twin bolts. It's a little difficult to judge rock quality when you scrape off a 10cm square to put a bolt in; are you in to a good piece of the real wall or just a loose block? We had some exciting moments figuring this out, and sometimes used three bolts if we were concerned.

If I'm not mistaken, the Helmcken Falls are located in a provincial park and popular with tourists
Yes, and one thing I would like to stress is that these bolts are invisible from any place a visitor can see the falls from. Plus we stripped all the quickdraws and slings from the belays so if we can't make it back this year the route will be totally invisible in the summer. I'd like to see future climbers do this also. I doubt you could even see a quickdraw or sling in the summer due to all the mist, but better to be sure as the falls are a big attraction in the area, just respect to the other visitors.