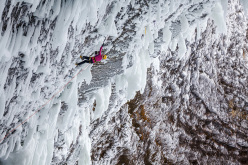 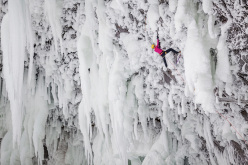 PORTFOLIO / gallery Portfolio: Angelika Rainer and Clash of the Titans at Helmcken Falls

Angelika Rainer and Clash of the Titans at Helmcken Falls

The report by Angelika Rainer about her recent repeat of Clash of the Titans WI10+ and the details of Overhead Hazard (M13+, 200m), the new route put up by Will Gadd at Helmcken Falls, Canada.

Three days ago we broke the news about Clash of the Titans, the new route established by Tim Emmett and Klemen Premrl at Helmcken Falls, graded WI10+ and repeated last Friday by Angelika Rainer whose report we've published below. We also briefly mentioned a difficult new route first ascended by Will Gadd and now we've got the details of Overhead Hazard: it's not a single pitch but, like Spray On... Top, another route that climbs the entire cave to the top. Read 200m of climbing up to M13+ on which "every single pitch is radically overhanging" according to Gadd "except the last one, it’s just overhanging." Together with John Freeman, Sarah Hueniken and Katie Bono the Canadian alpinist needed "Twenty plus days" during which "we all literally froze our feet at -30, took whippers bolting on lead, got turned into icicles by the spray, and generally put everything we had into the ascent. I literally almost died on this line due to hypothermia and the resulting cloudy mind, it’s full-on."

CLASH OF THE TITANS by Angelika Rainer

Our "climbing trip" to Canada took us to Helmcken Falls, an incredible cave more than 150m high with an enormous waterfall that sprays water all across the overhanging face that creates beautiful ice formations that tease the fantasy of all ice climbers. The route I sent is called "Clash of the Titans" and is really beautiful. It's the first time that climbed ice this difficult, initially I always felt as is if the ice would break all the time, but on my second attempt I realized that this wasn't the case and started to gain familiarity with this particular type of climbing. "Placing" the axe into this steep ice isn't at all easy but Tim and Klemen, who have extensive experience at this game, were an important guide.

Helmcken Falls is a wonderful place that still has lots of potential, but you have to be careful and well prepared before you go. On warm days, when temperatures reach around 0°C, the huge icicles continuously detach and fall oto the ground and this makes being there significantly more dangerous. In addition, finding the routes and freeing them from the hanging daggers is very difficult, sometimes even impossible, as was the case with Wolverine then proved impossible to climb.

Thanks to Tim and Klemen for giving me the chance to try it, and thanks to my fellow adventurers Marco and Klaus for helping me on the climb and for the beautiful photographs.