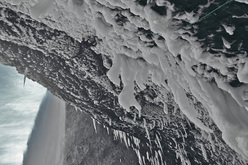 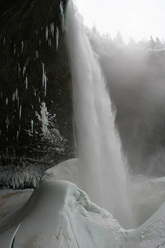 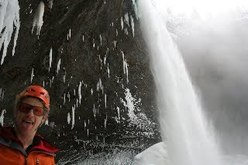 Tim Emmett beneath Spray On at Helmcken Falls, Canada, first climbed by himself and Will Gadd, 01/2010
Photo by Gadd/Emmett collection

Spray On, Will Gadd and Tim Emmett climb big ice at the Helmcken Falls, Canada

Will Gadd from Canada teamed up with Tim Emmett from Britain to carry out the first ascent of Spray On, a 30m ice climb at the Helmcken Falls they tentatively graded WI10.

"I'm just back home after climbing the coolest ice I've ever seen or climbed, anywhere in the world." These are the words Canadian ice climbing specialist Will Gadd used on his blog to describe the experience he shared with British powerhouse Tim Emmett in climbing a 30m route at the Helmcken Falls at the Wells Grey provincial park in British Columbia, Canada.

Much like with Gadd's ascent of the Hunlen Falls a year ago, the two climbers located their latest climb thanks to photos found on the internet. After abseiling to the bottom of the canyon they realised that the spray ice which had formed in the back of the cave offered the greatest potential. Over a two-day period the two bolted a 30m, 45° overhanging line from the ground-up through the blobs of spray ice, then redpointed the route. After much discussion Gadd stated "it is a whole hell of a lot harder than anything I've ever climbed on ice. The only thing I could compare it to is M10 or harder drytooling, but you have to swing for placements instead of just hook. WI 10 is the lowest grade I can give it with a straight face; many people who can drytool M10 will find the ice climbing a lot harder I think, it's real, honest, cuts-on-your face ice climbing. Not one single drytool move in the whole pitch; pull up, lock off, work for a placement. Just like normal ice but on a 45-degree wall." In this exclusive interview, Will Gadd shares his thoughts about Spray on in particular and spray ice in general.


Hi Will. W10 presupposes WI9, WI8 etc. To your knowledge, how many WI7, 8, and 9's are there out there?
There's some history that needs to be shared I think, or at least how I look at it. I've only ever done one waterfall ice route that I'd rate grade 6. That was in Italy, it was a series of icicles that had formed out an overhanging wall and bonded together. Truly amazing, pumpy, great climbing on that one. The other "grade 7s" that I've done were just grade 5 or 6 with bad gear. Does bad gear make a route a different grade? The funny thing about ice climbing is that the only way to make "harder" routes was to make the climbing more dangerous, the technical difficulty usually did not increase. That is the big reason I started drytooling; I climbed enough super-thin pillars and detached shitty ice to know that if I kept pushing that I was going to die sooner rather than later, and the climbing still wasn't any harder or even aesthetic really, just more dangerous. For me that was literally a dead-end game.

So where did you start playing?
Drytooling opened up thousands of absolutely fantastic climbs, and also pushed the difficulty side of ice climbing thanks to dangling pillars, thin ice on steep walls, etc. But I've never fallen off the ice on a mixed climb; the ice is always the rest, the happy moment in the physical battle for me.

Drytooling exploded in popularity a few years ago, the novelty seems to have worn off.
In the end the quest for pure drytooling difficulty also dead-ends as it's always possible to chip an intermediate hold, and I felt like the line between climbing and chipping was getting very blurry.

So where did that lead you?
Seracs and ice caves on glaciers also offer options, and I've done a lot of that. But that's not true waterfall ice, it's snow that's turned into ice. On those routes you basically slam in holes first, and then climb the holes, which is a lot like drytooling. I also lost a little enthusiasm for ice cave climbing when I came back one morning to an area I had been climbing on and all the ice had fallen down. And then my good friend Hari Berger died, and ice caves really lost their attraction for me. Icebergs are fun too, but have their own problems. On spray ice you have to swing, and truly climb ice. That might not sound like a big distinction to non ice-climbers, but I think ice climbers will understand the difference.

When did spray ice come into play?
Last year we climbed a really cool route in BC (Hunlen) that had a lot of spray ice on the walls; it was very difficult to protect, but the rock was granite so we could get good natural gear into the cracks when we could see them. A light went off in my head, the same sort of light that I saw with Jeff Lowe many years ago when we started mixed climbing: Why not climb spray ice?! It was an exciting realisation for me because it opened up a new way of looking at the world, and made Helmcken seem possible.

How psychologically demanding is this climb?
It's in a very dynamic place. Icicles are falling and breaking from the ceiling, and you have to use some alpine risk evaluation skills to get in and out safely. There are bolts for gear, but the climbing is very insecure, and you have to be careful not to hit the ground while clipping. It's a lot more mentally demanding than most hard drytool routes, about the same as leading difficult water ice for me.

Why does it get a WI grade if the pro is bolts?
Lots of ice routes use rock gear and still get an ice grade as the climbing is on ice. I never rated glacier climbs with water ice grades even though you protect those with screws. This ice came from falling water, there's no drytooling, so it gets a water ice grade.

I have a feeling that your experience on the Hunien Falls was globally harder?
You're right, Hunlen was lots harder in many ways - we were camping at -25 for Hunlen, much higher objective hazard, but the technical climbing was definitely a lot easier. Both were great experiences!

How do you see things evolving from here?
You know what's exciting here to me? The future. We climbed only 30m of a 150m wall. We had poor spray ice conditions according to the locals. That wall is also at least 500m across. Theoretically you could do something like 100 routes that were three or more pitches up overhanging icicles the whole way. Some would be drytool routes in places, but that's cool too. How is that for a damn cool future!

You sound keen...
I'm more excited about winter climbing than I have been for years. There are lots of questions to be figured out about spray ice, but I think Tim and I found something that just ignited a fire in our climbing psyches and that, I think, is the greatest gift a climber can receive or share.