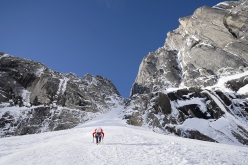 Andres Marin starting up the East Face of Golgotha in Alaska's Revelation Mountains with Clint Helander. Climbing alpine style, from 23-25/03/2022 the pair established The Shaft of the Abyss. This crowns six years of effort by the team and 14 years of dreaming by Helander
Photo by Clint Helander 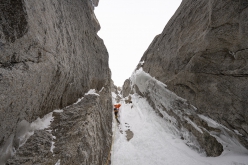 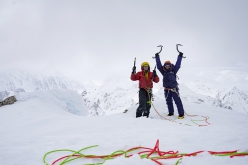 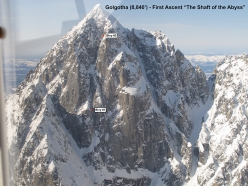 From 23-25 March 2022 Clint Helander and Andres Marin completed the first ascent of 'The Shaft of the Abyss' (VI AI5R M5 90° Snow A0 ca. 4,000’), a huge new mixed climb up the east face of awe-inspiring Mt. Golgotha in the Revelation Mountains of Alaska.

After four expeditions spread over six years, the pair have made the first ascent of The Shaft of the Abyss a ca. 4,000-foot direct line up the sheer east face of Golgotha. This route marks the culmination of a 14-year dream of Helander, who first spotted the line with the late Seth Holden in 2008.

Helander and Holden examined the face in 2010 but didn't attempt it and, after Holden's death a few months later, Helander returned in 2012 with Ben Trocki, only to retreat after two pitches due to dangerous conditions. A change of objectives saw the pair climb the massive couloir on the east face to the southeast face and, in doing so, complete the coveted first ascent of Golgotha.

Helander and longtime climbing partner Andres Marin teamed up in 2016 only to be shut down by prohibitively dangerous conditions; a sudden warm front resulted in wet snow and temperatures above zero and, while organizing camp, they were swept away by an avalanche that knocked them both over and partially buried Helander up to his waist. Fortunate to have survived unscathed, they made a makeshift bivy from the remains of their tent and endured another cold week before being flown out.

The team returned in 2017 with Leon Davis and managed to climb seven pitches up the narrow runnel of the east face before a broken crampon forced a retreat. Helander and Marin returned in 2018, but excessively snowy conditions on the route did not allow for an attempt.

The duo returned again in March 2022, hoping to finally finish their route. Armed with the knowledge from their previous attempts, they landed on the Revelation Glacier and ferried loads to the high pass, fixed lines into the Misfit Glacier and scoped the route from the base. On Wednesday, March 23, they left basecamp and were soon kicking steps up the entrance couloir toward the route’s defining feature, the ca. 1,800-foot runnel. After four technical pitches, they opted to bivy in a protected cave they had discovered in 2017, one of the only places on the lower route safe from overhead hazards. The next day, they passed their previous highpoint and continued toward one of the route’s cruxes, a free hanging dagger of ice that presented one of the major questions of the entire line. From another smaller cave at the base of the dagger, Helander chopped a window through a curtain of ice and surmounted the crux through a combination of mixed and aid climbing, including a small lead fall.

Now out of the runnel, Marin led a 170m simul-climbing block through steps of steep ice and neve. Another rope stretching pitch of thin ice over a blank slab led to the pair’s second bivy on a hastily chopped ledge. While Marin organized the gear and anchor, Helander laid out their sleeping pads and bags in the tent. Part of the tent hung over the ledge and, as he went to turn around inside, Helander slid off the ledge, tent and all. Only his 10-foot tether kept him and all the gear from falling completely off the mountain. Despite a ripped tent and a close call, they managed a comfortable night.

On the third morning, another five pitches of demanding climbing took them to the summit of Golgotha. Only in the final few feet did the technicality ease. Finally reaching the summit after six years of effort by the team and 14 years of dreaming by Helander felt surreal, but a long descent remained and the weather seemed to be deteriorating fast. Seven rappels down the southeast face and into a broken system of rock and snow lead to the major couloir utilized on the mountain’s first ascent in 2012 by Helander and Trocki.

Back at the Misfit Glacier, the two picked up a small cache they had left at the base of Golgotha and plodded up a 1,000-foot pass back toward their basecamp on the Revelation Glacier. When they reached their basecamp at 11 PM, they were astonished to see that a massive wind storm had ripped their geodesic dome kitchen tent from its anchors and it was nowhere to be found. Scattered all over the glacier for a quarter mile, they searched for remnants of their food and survival gear well into the night. In the morning, they found the tent fly, but the tent body was never found, despite lengthy searches down glacier. It had blown so hard that a probe, which served as a windsock, had been bent and rendered useless.

Several more days of wind made living unpleasant and the team used the remaining tent fly to make a rudimentary snow cave fortification. After nearly a week of waiting, the two were picked up by Rob Jones of Hesperus air and dropped at a remote landing strip. There, they were taken back to Anchorage by Chris Trygg of Trygg Air. The team noted that travel to the remote Revelation Mountains has become increasingly challenging and expensive.

This was only the third ascent of Golgotha. After the first route up the mountain climbed by Helander and Trocki in 2012, Slovenians Janez Svoljšak and Miha Zupin established Father on a gully system right of the east face in 2019. They had previously attempted the Direct East Face (Shaft of the Abyss) route, but had been forced to turn around after nine pitches.

In the past, Helander has made over 25 trips to the Alaska Range and over the last decade his numerous hard, technical routes on unclimbed peaks have highlighted the huge potential of the Revelations. Successes include the first ascent of the West Face of The Apocalypse with Jason Stuckey in 2013 and the huge South Ridge of Mount Huntington in 2017 with Jess Roskelley.