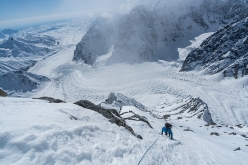 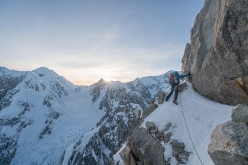 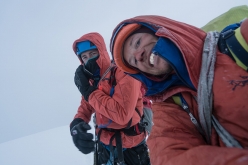 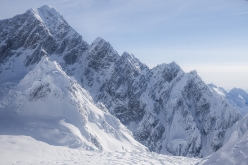 The immense South Ridge of Mount Huntington (3731m) in Alaska, climbed by Clint Helander and Jess Roskelley via their new route 'Gauntlet Ridge' from 18 - 25 April 2017
Photo by Clint Helander

Interview with American alpinists Jess Roskelley who made the first ascent of the South Ridge on Mount Huntington (3731m) in Alaska with Clint Helander. Called the Gauntlet Ridge (Alaska Grade 6, M6, A0, 95° snow, 2,500m), the committing new route was climbed alpine style over an 8-day period in mid-April.

From 18 – 25 April 2017 American alpinists Clint Helander and Jess Roskelley made the first ascent of a long, difficult and dangerous new route on Mount Huntington in Alaska. After spending a day approaching the mountain, the duo spent the next five days climbing alpine style up the striking South Ridge past Peaks 9460, 9800, 10100 and Idiot Peak. Excellent conditions aided the committing ascent - huge cornices and seracs loomed above the line, and a retreat from very early on would have been extremely difficult - but the weather broke as they weaved their way up previously untraveled terrain to the ice crowned summit of Mount Huntington. With no visibility or energy to descend the mountain, they spent the next 36 hours huddled in a tiny tent and wet sleeping bags on the top of Mount Huntington before a sòlight break in the weather allowed them to descend down the West Face Couloir. The new route has been called Gauntlet Ridge and despite its striking appearance is believed to have only be attempted once before, by a Japanese team in 1978.

Writing after the ascent, Helander stated "From the vantage point of the innumerable challenges and the level of commitment of such a complex line, it is easy to see why no one ever climbed it before us. But when the striking profile of that erratic ridge cleaving up and down against an azure Alaskan sky is present in our vision, we cannot believe it took someone so long to try. Completing the first ascent of Mount Huntington’s biggest line will forever remain a milestone achievement in our lives. The whole time we felt as if we were running a gauntlet; being beaten down only to rise again and again to face the next unknown barrier on the mountain and in our minds." Below is our interview with his climbing partner Jess Roskelley.

Jess, for the benefit of those who aren’t clued up about Alaska: can you tell us a bit about Mount Huntington. What does it represent?
Mt Huntington is a beautiful pyramid of ice. It is shorter than its neighbours Mount Hunter or Denali, but every side is steep and iconic. Even its easiest route is quite a bit more technical that the standard route of Denali. It was first climbed by the Northwest ridge or the French ridge in 1964 by a French expedition led by Lionel Terray. Its just one of those mountains that stand out. It’s on the hit list of a lot of alpinists.

What about its South Ridge?

The South ridge was first attempted by a Japanese team in 1978. The AAJ only had a couple sentences that basically said they attempted it in July and “rock good, snow bad” so there wasn't much in the way of advice. The ridge is made up of five increasingly higher peaks looking like a saw blade, the biggest being Mt. Huntington. It was a monster ridge. It was hard to comprehend how big it was before we started and it still is just thinking about it at home.

You teamed up with Clint Helander
Going out with Clint was super fun. I had not climbed with him before. I had summited Fitz Roy at the same time as he did a couple years ago and we hung out in Patagonia together. We talked about climbing something then so it was great to get a call from him to work on his project. We have the same sense of humor so we have a blast.

How long did you think it would take you?
Clint called me at home in March and asked if i’d go try the South ridge when the weather got good. I had not planned in the least bit to climb Mt. Huntington this year, much less the South ridge. Clint had been planning this ridge for a while and had the days down pretty well. We took 5 days of food that we could stretch a couple more days and in the end that’s how many days it took to summit, so he was spot on. We did have to spend two nights on the summit in a storm where we got a bit hungry, but that’s the way it goes. We packed heavier than usual on this trip because we knew that if we got caught out we would want some extra gear. Our packs were close to 40 pounds. We had a Firstlite tent and two 20-ish degree bags but most of the weight was food.

How was the actual climbing?
The route was intense. It snowed a bit on us the second day and just a small amount of snow was enough to bury us in small slides as were traversed from the first to the second peak. I knew that descending off either side of the ridge would be dangerous and really was not an option. The ridge traversing turned into face traversing, wading through waist deep snow up and down over flutings. Over and over again. Once we got on one of the south faces the rock was amazing and the snow was pretty good. The climbing was incredible not only because it was active and hard, but also because it was mentally demanding every day.

What about snow conditions?
The snow conditions were good for what we were working with. It had not snowed in six weeks and we had 6 days of good weather. If it had snowed any time in the month before we arrived there would be no way we would have left the ground. The first peak we climbed to gain the ridge was prime avalanche terrain. The snow had consolidated enough on that face that we booted up the old runnels that were left by snow sliding six weeks before.

At one point you stumbled across remains of the Japanese attempt. What were your thoughts?
We did find the 1978 Japanese expedition left over gear. 13 Japanese from Sapporo had attempted the ridge that July. There was not much written about it except they said the rock was good and the snow was bad. At our second bivouac we found rope ladders, a can of Chevron white gas and about 35 pitons. We took around 15 of the pitons and used most of them rappelling off the peaks.

You guys enjoyed incredible weather…
We knew we had a good weather window but I’ve been fooled before. We certainly did not want to get stuck out there. Like I said before, descending the sides of the ridge was really scary so we were in a hurry.

Out of interest, did you guys always climb roped up?
We simul climbed 90% of the climb. Some of the terrain was worthy of pitching it out but I trusted Clint and he trusted me to move fast and without mistakes. Occasionally Speed is Safety and the safest way off is up. This was one of those climbs.

Did you ever think you might not make it?
At some point I didn't know if we would make it but I also knew the safest way off was up over Mt. Huntington. So we just matter of factly said we have to and we did.

The weather turned foul just when you reached the summit. Can you tell us about the descent?
Yeah, the weather turned shit the second we got to the top. Our window had not only shut down but more accurately slammed shut. We spent two nights on the summit. We had fuel and a couple candy bars left so we weren't going to die. We may have been super hungry but nothing to serious. So instead of rolling the dice in that fog and just descending we thought it would be better to wait until a break so we could see enough to be sure of where we were going. Once we got on track it didn't take long to get down. So the descent was no problem, it was finding it in a sea of white.

You were fully committed, yet at the same time you even had phone service out there. So how out there were you?
I did have phone service at points but it didn't work as well in the nasty weather at the summit. I brought my phone for the camera, these days they take good photos. It didn't matter though. If things had gone bad we had an Inreach sat phone and a phone that worked sometimes. The only difference maybe is the we could have called the helicopter if one of us were hurt, but in any case we were still a long way from help should we have needed it.

Can you put the Gauntlet ridge in perspective with other climbs you’ve done?
The ridge we did was my best climbing achievement because it was technical but more so committing. It bumped up my mental game a notch or two. I’ve never been that committed. I’ve climbed a lot of faces but stuff I could retreat from if need be. If one of us broke a crampon or lost a tool it would have been a scary thought to get off the ridge. If it had stormed and snowed and we had been forced to retreat I’m not sure how that would have gone. Just the little amount of snow on our second day on the ridge made the slopes cut loose loud continuous snow sluffs. I’m not saying I won’t get that committed again, but I’m not sure I’ll get the chance. It just doesn't come up as often as you'd think.