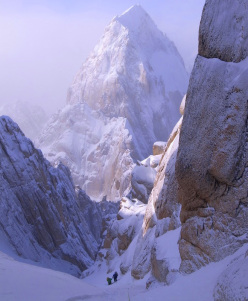 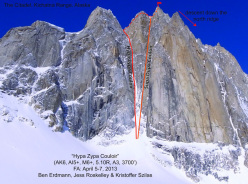 American alpinists Ben Erdmann and Jess Roskelley and Denmark's Kristoffer Szilas have kicked spring 2013 off to an outstanding start in Alaska with their impressive first ascent of the 1100m high Hypa Zypa Couloir on the East Face of the Citadel in the remote Kichatna Range.

The experienced trio reached the base of the mountain by air taxi on April 4. Although the original plan had been to repeat Supa Dupa Couloir, the route established in 2003 by Mike ‘Twid’ Turner, Stu McAleese and Olly Sanders, the trio had also been informed about a possible line immediately to the left and on arrival the ice runnels seemed in ideal conditions.

Wasting no time at all, the three set off shortly after midnight (less than 12 hours after landing on the glacier) and proceeded to forge their new line up the steep snow and ice couloir, past difficulties up to AI5+ and M6+. After a first cold bivy - a ledge hacked out of a 60° ice slope - the trio continued early the next day to exit the couloir and climb past the col on to the rocky south ridge. This was breached with hard A3 aid and run-out 5.10R climbing and a second bivy - another chopped ledge - was made just short of the summit which was reached the next morning. The abseil down the North Face proved taxing with stuck ropes, exposed down-climbing and an abseil off a spectre-hook adding to the difficulties and after crossing the Bergschrund the three returned safely to their base camp, albeit with minor frostbite to their fingers, 70 hours after having set off.

This immediate success boded well for the remaining two weeks but as Szilas told Planetmountain "right after we came off the route the temperature dropped about 15 degrees and it became so cold that we couldn't dry out our gloves even though there were no clouds at midday. The fuel pump for our stove wasn't working due to the cold either. We even wore all our clothes in our sleeping bags but were still shivering through the night so we simply had to call for the plane to fly us out. The thermometer had dropped to -30°C: one has to be lucky with the temperatures this early in the season in Alaska and we'd been extremely lucky during the climb."

Szilas concluded "It was the first time any of us had been to the Kichatna Range; we've each done about a dozen of expeditions around the world, but so far the Kichatnas is the coolest place any of us have ever been. There are only one or two teams in this range each season, so it is a real wilderness experience."