► News ► Alpinism ► No Rest For the Wicked, new route in Alaska by John Frieh and Jess Roskelley
Versione italiana 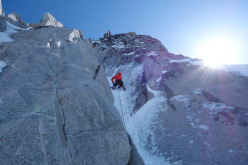 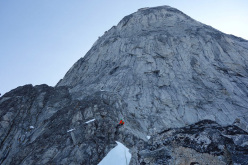 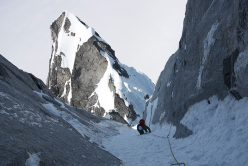 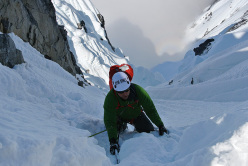 PORTFOLIO / gallery Portfolio: No Rest For the Wicked, new route in Alaska by John Frieh and Jess Roskelley

No Rest For the Wicked, new route in Alaska by John Frieh and Jess Roskelley

On 29 and 30 May 2014 American alpinists John Frieh and Jess Roskelley made the first ascent of No Rest For the Wicked (IV+ AI6 M7), a difficult new route up the West Witches Tit in SE Alaska. The report by John Frieh.

Nearly five years ago I made my second trip ever to Alaska where Dave Burdick and I made the first ascent of the West Ridge of Burkett Needle. That climb made a huge impression on me and I began making a list of climbs I wanted to return for. One of the lines I found online in John Scurlock's excellent photo gallery was the West Ridge of the West Witches Tit. John's photo made it look like a series of easy granite ramps and Dieter Klose (local former climber who knows the Stikine better than everyone) confirmed it was still unclimbed.

In August of 2013 I flew with a group from Portland intent on attempting that line; unfortunately a lean winter followed by a hot summer resulted in impassable glaciers so the team opted for the 50 classic East Ridge of the Devils Thumb. A nagging injury from earlier in the season forced me to sit that one out and delivered me my first Stikine shutout. I had to return.

I did this year and on May 28th Jess and I flew from Seattle to Petersburg where we grabbed some stove fuel and then flew to the Devils Thumb massif's single landing zone SE of the Devils Thumb. We scouted part of the approach before turning in early. The following morning (May 29th) we departed camp around 3:30 am and began the long traverse around the Devil's Thumb massif to reach our proposed route on the West Witches Tit.

After 8+ hours of traversing multiple glaciers and ridges that required climbing and rappelling we finally reached the West Ridge which we were "pleasantly surprised" to find was anything but easy granite ramps. We took a brew stop and debated our options; if it had been any later in the day I doubt we would have tried. In the end Jess said "why not?" and we launched just before noon.

Almost immediately we were faced with stout mixed climbing. I kept thinking "that had to be the crux!" only to be faced with another hard pitch. Roughly halfway up the route Jess led arguably one of, if not the, hardest pitch I've ever seen lead in the mountains. 15 inches wide give or take; perfectly smooth and unclimbable had it not been for the ice in the back of the chimney. Exiting out required lying back a giant flake with your feet above your head to attempt to get sticks in shit snow. Stout! As the pitch took nearly 2 hours to lead my sense was to bail at this point but we couldn't let such a proud pitch go to waste. More hard climbing followed; when it was all said and done I recall 3 or 4 solid M6ish pitches and one solid M7. Near the top we crossed over Bill Belcourt and Randy Rackliff's rap line from their original first ascent of the West Witches Tit in May of 1995.

We summited around 11:30 pm making the fifth overall ascent of the West Witches Tit. We discussed our options; though we were told a rap line existed down the south face that would make our hike back to camp shorter we were very worried about finding it in the dark and then rapping down new terrain. In the end we opted to rap the Belcourt/Rackliff line as we knew were it started and had some good beta from Randy and Bill about it. It turned out to be the right decision as their excellent line took us down very steep terrain on a single 70m rope. As an aside, their unrepeated line on the SW face looks amazing.

We hit the glacier sometime around 5 am; at this point it all gets foggy for me as we had been awake and on the go for 36 hours on a measly 3000 calories each. We likely would have laid down for a brief shiver nap but with the weather window rapidly closing we death marched our way back to camp where Wally promptly snatched us up.

"No Rest For the Wicked" is my fourth first ascent on the Stikine Ice Cap in the five years I have been climbing there and one of, if not the hardest route I have climbed ever anywhere. I hope I don’t sound arrogant in saying this but I am proud of our effort.