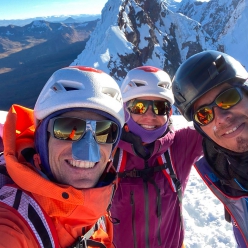 Andres Marin, Anna Pfaff and Alex Torres celebrating after the first ascent of Pan y Ácido up the South Face of Concha de Caracol in Peru (13-14/07/2021)
Photo by Anna Pfaff 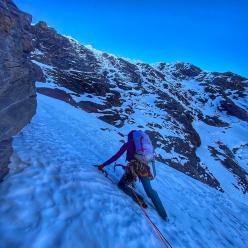 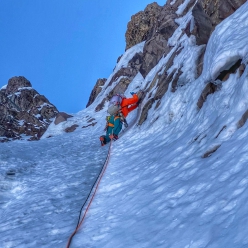 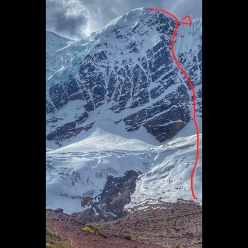 The line of Pan y Ácido on the South Face of Concha de Caracol in Peru, first climbed by Anna Pfaff, Andres Marin and Alex Torres on 13-14/07/2021
Photo by Anna Pfaff

Alpinists Anna Pfaff, Andres Marin and Alex Torres have made the first ascent of Cerveza, Pan y Ácido, a new mixed climb up the South Face of Concha de Caracol in the Cordillera Vilcanota massif in Peru.

A small international expedition comprised of Andres Marin and Alex Torres from Colombia and Anna Pfaff from the USA has successfully climbed what according to preliminary research is likely to be a new route up Concha de Caracol, a stunning 5,640m peak in the Cordillera Vilcanota massif in Peru.

Climbing alpine style on the 13th of July, the trio forged a line up the mountain's south face, first climbed in 1972 by a German expedition. The alpinists dealt with terrain described as being both difficult and engaging to the right of the Catalan route established in 2019 by Orial Barò and partners, via a 700m line graded ED 90°. After breaching the face the trio made an open bivy on the ridge at about 5500m, and summited the next day before returning via the line of ascent.

The new route has been called Cerveza, Pan y Ácido. Success came about after Luis Condori from Pery, Danielle Dubois from Holland and Nathan Heald from the USA were forced to turn around 30 meters below the ridge due to dangerously unconsolidated snow in 2011.

15.07.2021
Nevado Huamashraju Este, new route in Peru by Iker and Enenko Pou
Enenko and Iker Pou have made the first ascent of ¡Viva Perú Carajo !, a new mixed climb up the South Face of Nevado Huamashraju East in Peru. At the same time their expedition partners Manu Ponce and Micher Quito also established a new route up the mountain’s north face.