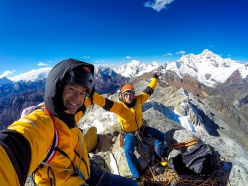 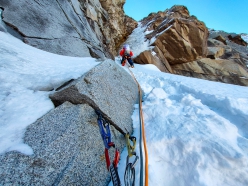 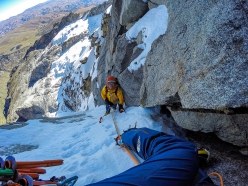 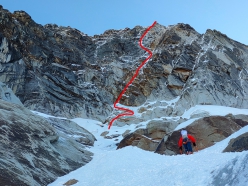 Enenko and Iker Pou have made the first ascent of ¡Viva Perú Carajo !, a new mixed climb up the South Face of Nevado Huamashraju East in Peru. At the same time their expedition partners Manu Ponce and Micher Quito also established a new route up the mountain’s north face.

Basque brothers Enenko and Iker Pou have got the Peru climbing expedition off to a great start with a new mixed climb up the hitherto unclimbed south face of Nevado Huamashraju Este. The 600m new route is called ¡Viva Perú Carajo!, breaches difficulties up to M7 80°, and follows "thin slivers of ice that, sneaking between the rock, cross the entire wall like a spider's web." Established all free and alpine style in a 15-hour push from base camp to the summit and back, it demanded the best of the Pou brothers.

"It must be taken into account that this is a south face, the equivalent of the north face in the western hemisphere, and at an altitude of around 5000 meters" they explained. "We climbed for seven hours in total. The first hour was spent negotiating a ramp of unstable snow, and the next six to climb the very vertical terrain. It was very cold, the temperatures never went above -15°C, and with the wind it felt even colder. The pitches are spectacular, on thin ice slabs glued to the rock with some mixed sections. In a very creative and surprising manner we were lucky enough to decipher the little white spider web that led us through this rocky world to the summit. At 2.30pm we raised our arms and cheered on top of Nevado Huasmahraju Este. We were at 5,350 meters and a world of mountains and valleys opened up all around us: the north face of Cashan 5686m that we had climbed for the first time in 2019, the imposing Huantsan massif and, behind us, Huascarán, the king of the Cordillera Blanca...

But we still had to descend, we had six hundred meters of rappels ahead of us down virgin terrain that we did not know, since we decided to descend down the opposite side of the mountain. We leaned over and began to shout, because we knew our friends Manu Ponce and Micher Quito were establishing a new route on this rocky face. We saw them just one pitch short of the summit, in the shadow and getting very cold. We descended to them and then continued equipping the abseils, because we knew it would take a lot of work." The four eventually descended smoothly and returned to their tents 15 hours after having set off.

According to the Pou brothers, the new route has all the characteristics to become very popular in the future. "The route is of immense quality and furthermore, unlike most of the ice climbs in the Cordillera Blanca which are quite dangerous due to looming seracs and falling ice from above, this is a very safe line, more typical of those found in the Pyrenees or the Alps. It’s also worth nothing that this mountain is relatively close to Huaraz and the approach is not particularly difficult. We believe this could well become a classic."

06.04.2020
Iker Pou, my ascent of Action Directe in Frankenjura 20 years ago
Spanish climber Iker Pou recalls his ascent 20 years ago of Action Directe, the Frankenjura masterpiece freed by Wolfgang Güllich in 1991. At the time, Pou’s ascent in autumn 2000 was only the second repeat after Alexander Adler and, nowadays just two decades ago, the route is considered one of the most famous and coveted sport climbs in the world.