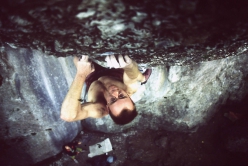 Iker Pou climbing Action Directe in Frankenjura, Germany in 2000. Freed by Wolfgang Güllich in 1991 and first repeated by Alexander Adler in 1995, Pou pulled off the third ascent in 2000
Photo by archive Iker Pou

Iker Pou on the starting dyno of Action Directe in Frankenjura, Germany in 2000.
Photo by archive Iker Pou 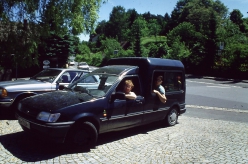 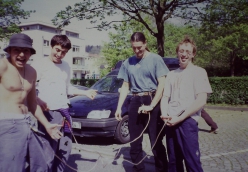 Iker Pou, my ascent of Action Directe in Frankenjura 20 years ago

Spanish climber Iker Pou recalls his ascent 20 years ago of Action Directe, the Frankenjura masterpiece freed by Wolfgang Güllich in 1991. At the time, Pou’s ascent in autumn 2000 was only the second repeat after Alexander Adler and, nowadays just two decades ago, the route is considered one of the most famous and coveted sport climbs in the world.

The first time I saw Action Directe was in 1998, the year I managed to climb Guenga in Baltzola, my first 8c+ which happened to be the first route of this grade in our home Basque Country. Our first trip to the Frankejura was that August, during our summer holidays. We were a good number of friends, passionate for climbing, with plenty of ideas but with very little money in our pockets. We had always dreamed of being able, one day perhaps, to visit this beautiful place in Germany and in the end the dream had come true. As to Action, it wasn’t until the very last day of the trip that I tried the route, when my friends eventually convinced saying that I couldn’t go home without at least trying it!

I remember that first day as if it were today, I immediately fell in love with the route and its surroundings. What a wonderful setting and, above all, what a truly impressive climb! For me, just being there was a dream come true. If you add the fact that I was trying what at the time was most famous route in the world, put up by one of childhood idols, well perhaps you can imagine that I too found it hard to believe.

That time in 1998 I tried the route for only one day, but it was more than enough to know that I would try again as soon as possible. Already at the first attempt I had managed to solve all the movements except the initial launch, but even if I could not hit the hole, I understood that it was possible. So with the motivation to the stars we got back in the car towards Vitoria, already dreaming of being able to return the following year.

At that time it was not like now, in Spain there was only one grade 9a route, by Bernabe Fernandez. It was really difficult to have reference routes for such high grades; practically everything was a project yet to be released. If you add to this the fact that we were really very young and didn't have a penny in our pocket, then perhaps you can understand what that first trip to Germany meant to us.

Nevertheless, with youthful enthusiasm and the right motivation you can overcome anything. I remember those fantastic days with all my friends perfectly. As soon as I got back from the Frankenjura I started training like a madman. I was extremely motivated to try the route again and wanted to be as fit as possible just in case I’d manage to return the following year.

To be honest, training wasn't always easy. At the time I was still working and finding the time to devote to a strict training regime was difficult. I often had to train from 10 at night until 1 in the morning. I started campusing like crazy and without knowing all much about it, simply because I it had worked for Wolfang and therefore it might work for me, too. I laugh when I look back at all those incredible things we did in training back then. Luckily we never got hurt!

For the following year we organised a longer trip and in August a big group of us set off for the Frankenjura once again. Everyone was really keen on encouraging me to try Action. The plan was for everyone to stay in Germany for a month and then return to Spain. Should it be necessary though, Andoni Perez and I would stay on longer, until the cold temperatures and lack of money would force us back south!

The trip started well, with some excellent attempts despite the heat and humidity. After less than a week I was managing to do the moves fairly easily and it was only a matter of linking them all together. But things weren’t that simple, it was way too hot and my skin got trashed. So we changed tactics several times, even getting up early so that I could try the route in cool morning temperatures. We immediately realised though that this wouldn’t work; balanced on the little pedestal before the jump, I was far too sleepy, And even though I’d run through the forest a bit to wake up my brain and body, it just wasn’t for me. So we went back to the usual routine, waking up not too early, warming up at some crag and then, before trying Action, having a delicious second breakfast in the pastry shop close to the Waldkopf sector which hosts Action. After my two attempts per day we’d spend the rest of the afternoon at other crags, climbing other routes, attempting other projects. The days passed like this, and even though every day I fell higher and higher, I kept on falling…

At a certain point my brother and practically all our friends had to go home. Just Andoni Perez and I remained. Colder, better conditions were on the way, so I was very motivated. Until the end of October... then all of a sudden it started snowing and we started to suffer. We had no money for who knows what luxuries, just enough scrape by, eating badly and sleeping in my Ford Courier. At the end of October, despite the fact that I’d fallen off the upper section of the climb several times, we decided to start traveling again see some other places. We promised though to save money and return with renewed energy.

So Andoni and I continued to travel and climb, first through Slovenia, then Italy and France. In Buoux we met the American Jorge Visser who the following year would accompany us to Frankenjura and take photos. It’s thanks to him that we have that famous video! At the end of November Andoni and I finally returned, totally exhausted but still full of enthusiasm, to our beloved city Vitoria-Gaasteiz where all our friends were waiting for us for a huge welcome home party.

For the new millennium we prepared everything better than ever before. We had managed to put aside more money and, clubbing together with all our friends, we managed to rent a small apartment in the center of the Frankenjura. This changed things considerably, because it allowed to rest and recover much better and consequently climb even harder. This, coupled with an improved strategy, eventually led to my success on Action. The previous year I had almost always tried Action for two days on, followed by one day off before trying it again for another two days. In 2000 on the other hand I attempted Action only on the day I was most rested, and spent the next days trying other projects. This meant that I got milage on many easier routes and gained confidence.

But once again I was forced to suffer. I basically had the route completely wired, and yet I kept falling from really high up. Actually, I fell at least twenty times off the last move... The weather certainly didn’t help me, with temperatures exceeding 30°C once again. The days passed quickly and when time ran out, my friends had to go home. In the end, it was just me and Jorge Visser. Then one day luck was on our side and the miracle happened; temperatures dropped to 17°C and we immediately raced to the crag for one last attempt.

Everything was magical that day, I remember it perfectly. We got to base of the crag and the wind was incredible. Since we were alone, Jorge hung the camera on a tree to record my efforts. On the first attempt the miracle almost happened: I reached the last move where I’d fallen so many times previously and just as I was reaching for the final jug to get established on the slab, inexplicably my hand opened and I fell... I couldn’t believe it! My second attempt didn't go at all well, I fell at the first move, on the dyno that had never betrayed me. I was obviously very nervous. I lowered to the ground, pulled the rope, tied back in and, practically without resting, started up the route again. And this time, yes, my attempt was perfect and I didn't fail. I sent Action Directe! My euphoria was so great that, I remember, words failed me, I was like in a bubble. The first thing we did was go for a beer and call our parents. I was so excited, just a few days earlier Eneko, Andoni and all our other friends had returned home and I wanted to dedicate my ascent to them.

Without them, my ascent of Action Directe would never have been possible. It was a collective success, the culmination of a far larger project, which included not only myself but an entire generation with very few resources but almost infinite motivation. It is with all my heart that I dedicate this story to all of them, and also to all those who unfortunately are no longer with us. ¡Vamos!

29.01.2020
Iker Pou celebrates 20 years of climbing 9a
42-year-old Basque climber Iker Pou has made the first ascent of La Nave de los Locos on the island of Mallorca in Spain. With this ascent he celebrates 20 years of 9a climbing, after sending his first in 2000, Action Directe freed by Wolfgang Güllich in the Frankenjura, Germany.