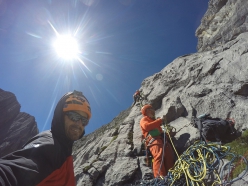 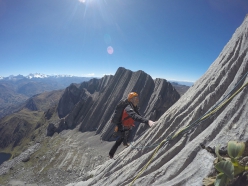 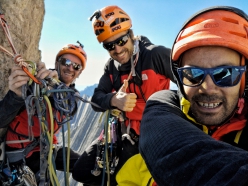 The North Face of Cerro Tornillo in Peru and the line Burrito Chin de los Andes (700m, 6b), first ascended in a single day on 02/07/2019 by Eneko Pou, Iker Pou and Manu Ponce
Photo by Hermanos Pou

On 2 July 2019 Spanish climbers Eneko Pou, Iker Pou, Manu Ponce, accompanied by cameraman Alex Estrada, made the first ascent of the north face of Cerro Tornillo, a striking 4900m peak in the SE part of the Cordillera Blanca in Peru.

The mountaineers Eneko Pou, Iker Pou and Manu Ponce arrived at Huaraz aong with cameraman Alex Estrada at the end of June and after having spent the first days acclimatising in the city that sits 3300 meters above sea level and acquiring provisions, they then started their exploration of the area before eventually set their sights on Cerro Tornillo. After a short rest they returned and, with the help of mules, made the 3 hour approach with gear and food for five days to their base camp at 4500m.

With no previous information to act on they reached the foot of the mountain early the next day and then opted for a fast, single push ascent without bivy gear. Swinging leads they climbed swiftly and managed to reach the main summit after a 6-hour push, during which dealign with the altitude proved more demanding than the 6b technical difficulties. The new route has been called Burrito Chin de los Andes in honour of their cameraman Alexander Estrada and is the first route up the mountain’s north face.