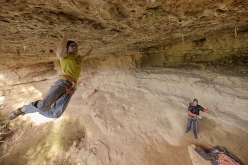 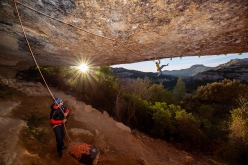 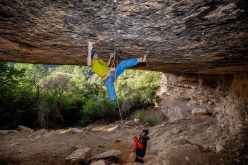 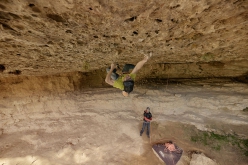 Iker Pou at Margalef frees Artaburu, his hardest climb ever

At Margalef in Spain, Basque climber Iker Pou has made the first ascent of Artaburu, his hardest sport climb to date.

"La ruta más dura." These are the words used by Iker Pou to describe Artaburu, his hardest sport climb ever freed at Margalef the other day. The 41-year-old sent the route after a 6-year courtship and Artaburu is described as "a perfect roof, well not quite perfect, because it even descends, about 20 meters long across a series of pockets. A authentic ‘fiesta’ of monodoits and two-finger pockets across a roof that is scary just to look at." The climbing is obviously ferocious and extremely physical: "Very few footholds, and those that exist are very bad so you have to constantly dyno them from one pocket to the next."

Artaburu is currently without a grade but given his track record and seeing how much Pou had to invest in the first ascent, it is plausible that the route is 9a or 9a+. In 2000 Iker, aged only 23 at the time, made the coveted third ascent of Action Directe in the Frankenjura, while in 2012 at Margalef he made the first ascent of Nit de Bruixes, a 9a+ which may well be 9b and which so far has only been repeated by Ramon Julien Puigblanque. Iker partners with his brother Eneko and the two have climbed many of the world’s most beautiful and difficult peaks. Ascents include the first free ascent of Bravo Les Filles 8b / 600m up Tsaranoro in Madagascar in 2004, the repeat and new variation to the famous Eternal Flame up Trango Tower in the Karakorum in 2005, Orbayu up Naranjo de Bulnes in 2009, La Classica Moderna up Mont Blanc with Hervè Barmasse in 2011, The Door on Baffin Island in 2012.

Iker concludes "the route cost me a lot; infinitely more than my previous 9a+, but I have no reference on routes harder than this, and that’s why I prefer future ascentionists to provide a grade. The only thing I can say for sure is that the route is very good and that I believe it will become a reference point in the future."