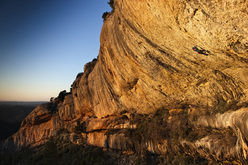 Iker Pou, the video of Nit de bruixes 9a+ at Margalef

The video of the first ascent of Nit de bruixes 9a+ at Margalef in Spain by Iker Pou.

"Personally, I found it harder than its neighbour Demencia senile (9a+), but as all routes are different, only time will tell." This is what Iker Pou had to say about Nit de bruixes, his latest super route freed at the sector La Ermita at Margalef in Spain. This is an interesting comparison, since Demencia senil was freed by American Chris Sharma at Margalef in 2009 and then repeated a year later by the Basque climber.

Pou freed Nit de bruixes in January 2012 and had worked the line since December 2010: 25 "physical" meters bolted by local climber and hut warden Jordi Pou (same name but no relation to Iker). The route is in true Margalef style: a series of painful single and two-finger pockets which require pure power and steel tendons... which Iker has plenty of!