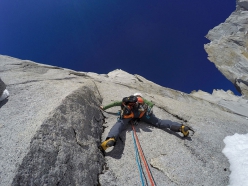 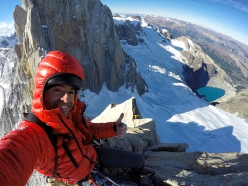 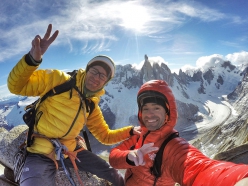 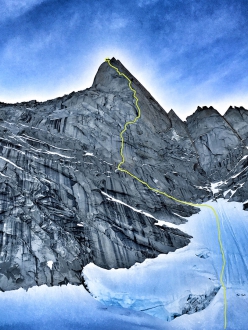 Iker Pou and his brother Eneko Pou have made the first ascent of Haizea, a new 550m climb up Aguja de la S in the Fitz Roy massif of Patagonia.

The weather in Patagonia during the last few weeks has lived up to its reputation providing only a few, extremely short, weather windows and consequently pinning climbers down in El Chalten. One of these breaks was used to great effect though by the brothers Eneko and Iker Pou who managed to squeeze in a new route up Aguja de la S, the stunning peak in the Fitz Roy massif first climbed in February 1968 by a French expedition led by Bernard Amy.

The new route established on 9 January by the Basque mountaineers is called Haizea and was climbed alpine style in single 12-hour push, from 6:30 to 18:30, after having set off from their base at 4:00 in the morning. They returned safely to their starting point at 23:00, after 19 hours on the trot.

Haizea ascends the ramp past snow up to 65°, then traverses left to follow a series of cracks so perfect that the duo did not have to place a single bolt. Just one peg was placed in order to breach a difficult section between two cracks, and while this pitch wasn't redpointed, the moves were climbed free and the peg later removed. Afer negotiating difficulties up to 7b+ the final two pitches are shared with La Femme de ma Vie, established solo in 1995 by Frenchman Lionel Daudet. Only the crux pitch was climbed with one point of aid.

Iker considers Haizea "a hard and elegant route that ascends in a direct way to one of these spectacular needles of Patagonia." This was the first time they climbed Aguja de la S and Iker told planetmountain.com that this peak "is a beautiful spire, with amazing rock of the highest quality!"

This fast success is the second route established by the Pou brothers in the Fitz Roy massif, after Aupa 40 climbed up the East Face of Aguja Guillaumet in February 2017. In 2007 the duo repeated the Supercanaleta up Fitz Roy, while in 2013 they repeated the Via dei Ragni route up Cerro Torre.