Eneko Pou dealing with pitch 2 of ¡Aupa 40! up the East Face of Aguja Guillaumet in Patagonia during the route's first ascent together with his brother Iker Pou on 4/02/2017
Photo by Iker Pou, Eneko Pou

Eneko Pou on pitch 3 of ¡Aupa 40!, forged up the East Face of Aguja Guillaumet in Patagonia with his brother Iker Pou on 4/02/2017
Photo by Iker Pou, Eneko Pou 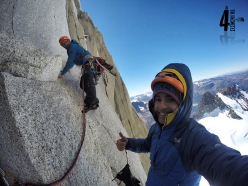 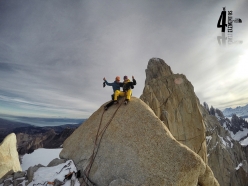 Iker Pou and Eneko Pou on the summit of Aguja Guillaumet in Patagonia after having made the first ascent of ¡Aupa 40! up the East Face
Photo by Iker Pou, Eneko Pou

Spanish mountaineers Iker Pou and Eneko Pou have established a new mixed climb up the East Face of Aguja Guillaumet in Patagonia. Called 'Aupa 40', the 525m outing breaches difficulties up to 5+, M7 85˚.

Making the most of the only day of stable weather during their month-long trip to Patagonia, on 4 February the Basque brothers Eneko & Iker Pou forged a new 525m mixed climb up the East face of Aguja Guillaumet in Patagonia’s Fitz Roy massif.

The new climb tackles the gully and series of cracks and chimneys to the right of the Slovene route (Klemen Mali, Monika Kambic 19-20/2/1998) and was climbed in 10 hours. Finding most of the cracks filled with snow and ice, the Pou brothers climbed most of the route with ice axes and crampons, past difficulties up to M7, 85°, V+. The round-trip to the summit and back to base camp required 21 hours in total.

The new route has been called ¡Aupa 40! in honour of Iker’s 40th birthday. This was not the Pou brother’s first visit to Patagoni and in the past they successfully bagged two of the most famous mountainering prizes at the end of the world: in 2007 they climbed Fitz Roy via Supercanaleta, while in 2013 they summited Cerro Torre via the classic Ragni route.