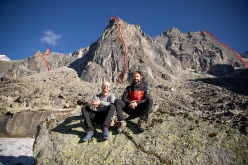 Iker Pou and Eneko Pou in the Bapsa Valley, Indian Himalaya and the lines of their three new climbs
Photo by Iker Pou, Eneko Pou 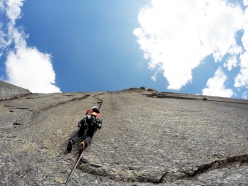 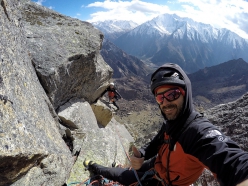 The Basque brothers Iker Pou and Eneko Pou recently returned from the Baspa valley in the Indian Himalayas where they established three new rock climbs on two virgin peaks.

This autumn Baspa Valley in Himachal Pradesh in India was the destination of Iker Pou and Eneko Pou who, despite the bad conditions initially, managed to establish three new routes during a joint expedition with Jacopo Larcher, Sieve Vanhee, Matty Hong, Matteo Mocellin and Alex Faedda.

The first route the Pou brothers established, up the virgin 4670m peak they named Midi d'Ossau, is called The Latin Brother (7c+/560m) in honour of great friend Hansörg Auer, who hd planned on joining them on the Indian expedition and with whom they shared two of their most memorable expeditions, to Baffin Island and Siberia. "we always laughed with Hans, because he was very funny and outgoing, and we always told him that he was our Latin brother. Hence the name of the route" Iker explained.

The second multipitch ascends the spectacular crest of a 4,900 meter mountain climbed for the first time a few days earlier by an Austrian expedition. Miguelink (6c/600 m) is in remembrance of Miquel Riera, the father of the Psicobloc, or Deep water Solo, who died while the Pou were in India. "We owe a lot to Miguel. You could say that he was the inventor of this type of climbing on the cliffs on Mallorca. He was a good friend: charismatic, funny, passionate, and very visionary, in every way. Another irreparable loss in a very small space of time" stated Eneko.

The third route is called Beti Alavés and is named after their home team. The 340m line tackles difficulties up to 6b+ and is the first up a slender 4560m needle now called Gorbea.

It’s worth noting that the three routes were established in just 10 days and each in a long day out in the mountains: 14 hours non-stop for The Latin Brother, 12 hours for Miguelink and 10.5 hours for Beti Alavés.