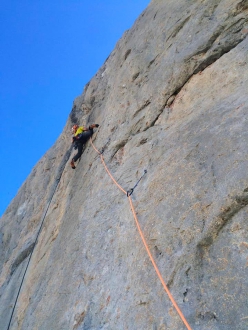 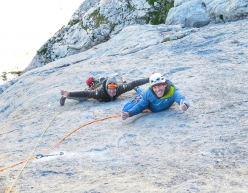 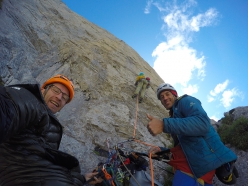 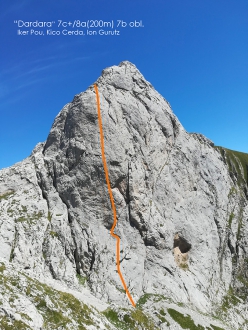 Iker Pou, Kico Cerda and Ion Gurutz Lazkoz have made the first ascent of Dardara (200m 7c+/8a, 7b obligatory), a new climb up Tiro Pedabejo in Picos de Europa, Spain

Iker Pou has a fondness for the Picos de Europa, in particular the massif’s main summit Naranjo de Bulnes, where in the past with his brother Eneko he has made the first free ascent of six different routes.

A few days ago though he visited the striking Tiro Pedabejo monolith for the first time together with Neus Colom to repeat one of the harder routes in the massif, the 200m 7c Big Bang. It was while climbing this fantastic route that the Basque alpinist noticed the enormous potential of unclimbed rock on either side. A week later he returned with Kico Cerda and Ion Gurutz Lazkoz to forge a new line immediately to the right. This 200m route, now called Dardara, was first ascended over a period of two days while a third day was required for the first free ascent.

"We are more than satisfied with the new route" explained Pou "it follows an incredibly beautiful line up perfect, very vertical limestone. The climbing is protected with a mix of bolts and friends, and bolts were only placed where it wasn’t possible to protect ourselves otherwise. The route runs through the central section of this fantastic wall, which has always been admired by mountaineers and climbers for its unique beauty and sheer steepness. We dare say it’s a small jewel of the Picos de Europa, thanks to the direct line and exceptional limestone."