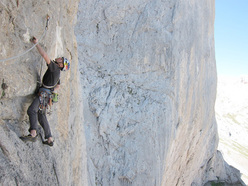 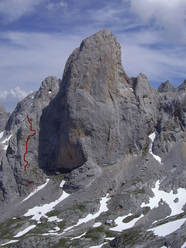 The Spanish climbers Iker & Eneko Pou have a long love-affair with the Naranjo de Bulnes, that magnificent limestone peak in the Picos de Europa in Spain. After having freed six difficult routes there – including obviously their masterpiece Orbayu 8c+/9a, 510m -the Basque brothers recently returned and freed Gorilas en la Roca.

Established last year from above by José Anaya, Ramón Pérez and Jorge Ferrero, the route had two aid pitches which were freed on 30 June by Iker at a somewhat more reasonable, but still difficult 7b+. Eneko told us "the route is interesting and being only 200m high it is considerably shorter than our other routes. It's protected above all with trad gear but there are some bolts on the harder pitches. There are two really nice pitches on very technical slabs with minute holds which demand a lot of balance. You need to climb carefully even on the easier pitches – the second pitch for example is graded 6c but there is almost no protection at all. We are convinced that, due to the quality of the line, it will become a popular route!"

Iker and Eneko are now in Italy, more precisely in the Dolomites, where they are waiting for some good weather. Evidently they enjoyed their trip last summer into the Pale Mountains: read Pan Aroma on Cima Ovest di Lavaredo and Solo per vecchi guerrieri on the Vette Feltrine.