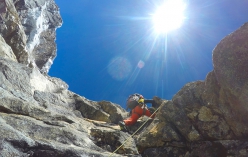 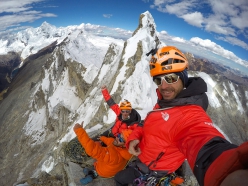 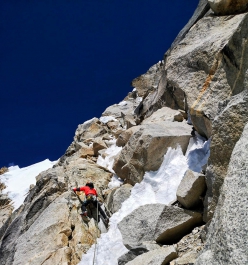 Iker Pou, Eneko Pou and Manu Ponce have made the first ascent of Andean Kingdom (800m, 7a+), the first route up the North Face of Cashan West (5,686m) in the Cordillera Blanca mountain range of the Andes, Peru.

Acting on a tipoff from Spanish climbers Carlos Cabeza and José Carlos Gómez Menor, the trio of alpinists comprised of Iker Pou, Eneko Pou and Manu Ponce have now completed the first route up the complex granite north face of Cashan West, the famous 5686m Nevado close to the Andean capital of Huaraz.

The route ascends a weaving line of least resistance past continuous difficulties up to 7a+ and was climbed alpine style over a period of two days. The bivy at half-height proved uncomfortable to say the least, on a ledge far too small for all three of them. After a poor night the second day proved tough. "Our bodies did not respond with the energy and vitality that we would have liked…" recalls Eneko, adding "We also had to deal with the altitude. We were climbing consistently above 5,000 meters."

The trio summited at 15:30 and immediately began the descent. Since the ascent route had involved long traverses, the climbers were forced to abseil straight down into the unknown. A long series of 60m rappels followed, depositing them with some luck on the glacier. From here they raced down the gully which they realised was extremely prone to rockfall, indeed, shortly after reaching base camp they heard huge crashing in the gully. "We had no energy to think about it. We were safe and that was the important thing" Manu Ponce explained.

The following morning they realised what they had achieved, rating Andean Kingdom as one of their best ascents of their career: a route of considerable difficulty, climbed alpine style and all free, at altitude, on a remote and inhospitable face in the Andes.

This is the trio's third new route in Peru after Cabeza Clava up Huanka Punta and Burrito Chin de los Andes, the first route up Cerro Tornillo.