Savannah Cummins, Alex Honnold, Anna Pfaff and Cedar Wright on the summit of The Penguin, Antarctic. The southwest face of Ulvetanna is clearly visibile in the background.
Photo by Pablo Durana / The North Face 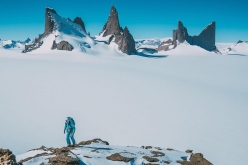 Anna Pfaff climbing the SE Ridge of Fenris with the peaks that make up the teeth of the Wolf’s Jaw in the background (left to right Stetind, Kinntanna and Holtanna)
Photo by Savannah Cummins

The alpinists had travelled to the FenrisKjefeten mountain range, more commonly referred to as Wolf’s Jaw instead of the original Norwegian name given by the early explorers, in order to climb the peaks around the famous Ulvetanna tower.

The big news is that the NW Face of this complicated granite cathedral has been breached by "veterans" Anker and Chin who established a big wall during an ascent described as "epic". The mountain is taller than El Capitan and located just over a thousand miles from the South Pole.

The expedition managed to climb 13 summits and establish 7 new routes, one of which, as previously reported, up a spire called The Penguin by the first ascentionists Honnold, Wright, Cummins and Pfaff. This is featured in the spectacular clip below.