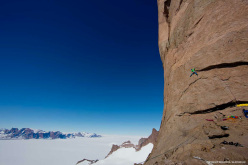 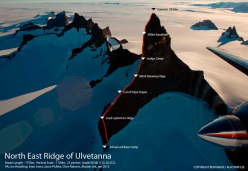 The North East ridge of Ulvetanna Peak (2931m) in the Antarctica has been climbed for the first time by Leo Houlding, Sean Leary, Alastair Lee, Jason Pickles, Chris Rabone and David Reeves.

After having established Base Camp before New Year, the team dug out an ice cave which served as ABC at the base of the 2931m high peak and then began forging a line up the long ridge. This required fixing ropes, a ledge camp at the base of the 400m high headwall, exhausting gear hauling (although the route is 1100m high it covers 17580m of terrain) and a final 10-day summit push. Rock conditions varied considerably along the 35 pitches with difficulties up to E6 6b and A2 aid.

Houlding commented "After generally kind weather, the Antarctic finally showed its fangs. We reached the epic, pointy summit in -35C with wind chill, wearing thick beards of ice, and hearts full of joy" and summed up the ridge climb as follows: "Huge, brutal and scary. And now climbed!"

The North East Ridge route is only the fourth climb up the mountain: the peak was first ascended in 1994 by Norway's Robert Caspersen, Sjur Nesheim and Ivar Tollefsen via the North West Face, and in 2006 Caspersen and Tollefsen climbed the North Face together with Stein-Ivar Gravdal and Trond Hilde. The third route, Sound of Silence up the West ridge, was established by Alexander Huber, Thomas Huber, Stephan Siegrist and Max Riechl in 2009.