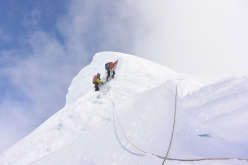 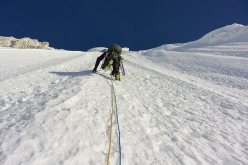 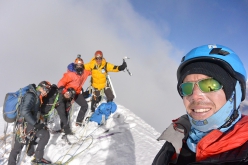 Peruana Supreme up SSE Face of Siula Grande in Peru

Five years ago my friend Sergio Ramirez who has a guiding agency in Huaraz told me about a beautiful unclimbed ramp on Siula Grande. Of Siula's three faces the south has been the least frequented do to the difficult access through the icefall which takes you to a cirque between the north face of Carnicero (5,960m), the east face of Sarapo (6,127m) and the south side of Siula (6,368m). The only other route on this face was climbed in 2001 up the left side directly under the summit, but only got to the ridge at 6,250m.

The entire SE pillar and ridge on the right side of the face was climbed in 2016 by two tough French climbers from the Groupe Militaire de Haute Montagne, Didier Jourdain and the late Max Bonniot, who established one of the more difficult routes on the mountain. After studying on google maps the ramp between these two lines seemed like one of the cleanest routes on the mountain with minimal exposure to objective dangers, if you could get through the icefall. I tucked the idea away to ripen over time until the mountain called me to it.

On July 22nd of 2017 my friends Aaron and Jeanne Zimmerman made the summit by the Catalan route on the East face where they recorded a height of 6,368m on the southern and 6,366 on the northern, the two being separated by about 150m horizontally. They reported that conditions were good and although Aaron got hit on his backpack by a fist sized rock on the way up, it was a perfectly timed day. I believe Jeanne is the first woman to summit this mountain. I went to attempt the Catalan route one year after their summit date, in 2018. We were not so lucky with the weather, whereas in 2017 they had a week of clear skies, we got hammered with 25 cm of snow at Camp 1 and had to retreat.

One of our team members Benjamin Billet was able to get some key photos of Siula while doing the Huayhuash trek to acclimate at the end of May. They revealed that the ramp on the south face gained the upper SE ridge cleanly with no cornice overhangs. The Catalonian Route seemed good also, but we wanted to go into the unknown. Arttu Pylkkanen from Finland, Ben and myself would be one rope team, while Luis Crispin and Thomas Schilter from Cusco, Peru would be the other.

On June 22 we took a private van from Huaraz for 7 hours through mining towns and dirt roads to the cowboy communities of Queropalca on the east side of the range. I had stayed in touch with our arriero Cesar from the year before and we went directly to his house in the pastures below Carhuacocha. On the 23rd we made our way with the donkeys to the lagoons at the foot of Yerupaja and Siula where we thought to camp at the last one Quesillococha , but the locals would not let us, we had to camp at the entrance to the sub valley and add 2km to our porting day! With no other choice, we went to leave some equipment by the glacier that afternoon.

On the 24th we dove into the labryinth of seracs that tumbled down from the basin. We thought to make it through in one day, but at 4pm we decided to camp under a huge wave of ice that protected us from anything falling from above, before it got darker. The next day we got to Camp 1 at 5,400m on the glacial plateau early with plenty of time to rest and hydrate. The only true obstacle was a large crevasse that ran the width of a debris field at the base of the North face of Carnicero. The whole area was exposed to rock fall and we hurried through as fast as possible though nothing came our way.

At midnight on the 26th we started our summit push. We wasted an hour and a half when we met loose snow on sheer rock on the left side of the wall and had to go down and around the large bergschrund at the base. Once on the wall proper it was straight forward 60-70 degree snow and ice climbing for 800m to the SE ridge. Clouds blanketed the east and the views of Carniceros unclimbed north face back dropped by the Cordillera Raura were unreal.

We reached the ridge at 6,200m late in the morning and took a rest. Although the ridge seemed straight forward from the photos, a hidden crevasse cut through the east face denying us an easy ridge traverse. Arttu was able to climb a vertical, exposed cornice and barely haul himself through the loose snow on top to reach the wider ridge above. As the clouds started covering the eastern flank of the mountain, the sun was getting lower in the western sky, we knew that if we went to the summit we would have a long descent in the dark, but being so close we could not give up. One last technical obstacle remained, the shoulder steepened into 100 meters of WI3 to gain the snowy summit ridge crest. After traversing for ten minutes on the broad ridge we made it to the summit at 4:30pm and even though it was late we stayed for a half hour and enjoyed our moment on top of this elusive summit. Using a stake as a dead man to descend the ridge we got back to the top of the wall, just as the light of day disappeared I went first setting the anchors as we started our descent into darkness. Halfway through the 17 rappels I was very dehydrated and throwing up bile. Luis took over for some time while I could hang on a stake and eat snow to get some liquid on my parched throat. After a few turns I revived enough to finish the rest of the rappels which didn’t seem to end. When we finally got to the bergschrund, I hammered in our best stake and went off the overhang 10 meters to the glacier below. Thomas and I went ahead to the tent to melt some water and we were all back to camp 1 at 3:30am on the 27th, 27 hours after we left.

Sleeping in was not an option since we had to get down the icefall before things heated up too much. Just as we rappelled into the debris field, a rock the size of a skateboard tumbled end over end near to the bridge over the crevasse we had to cross. Everyone was on high alert as we tried to re-cross the crevasse quickly but could not due to the bridge having melted into a spider web framework that looked like it could collapse. Delicately jumping and then throwing the backpacks over got us running down and into the protection of the seracs. The rest of the descent went without incident, reaching the base camp food stash at 7:30pm in the dark.

Cesar arrived the next morning cracking his whip over the donkeys. The weather had changed for the worst as it normally does when a principal Apu has been climbed, it is well known in Peru that the mountains become jealous and cover themselves in tempests. Back at Cesars house we ate fried lamb ribs cooked by his wife and drank Cristal brand beers from his stash, cherishing the feeling of going back to the comforts of the city the next day.

This summit represents something special for each of us aside from being the famous mountain of Touching the Void. Luis grew up herding alpacas in his family pastures below Ausangate in the highlands of Cusco. His natural and learned abilities have allowed him to climb some of the most difficult peaks in Peru. Thomas is only 16 years old and still in high school getting good grades so that his parents let him take leave to go climbing. They are the first Peruvians to summit this mountain in their own country. For Arttu he is the first Finnish climber on the summit also. Ben being the French guy, it is more difficult to be the first of his country on any peak! But this was his first major climb after almost losing his toes on the first ascent of a 6,000m peak in the Himalaya called Choppa Bamare, proving to himself that he is recovered and back in the game. Finally for me it is the 8th summit and last difficult peak in my quest to climb the 10 highest mountain massifs in Peru!

29.05.2014
Siula Chico: Looking for the Void, new French route in Peru
From 16 to 20 May 2014 the French alpinists Frédéric Degoulet, Benjamin Guigonnet, Hélias Millerioux and Robin Revest made the first ascent of Looking for the Void, a difficult new ice and mixed route up the West face of Siula Chico in the Cordillera Huayhuash in Peru.