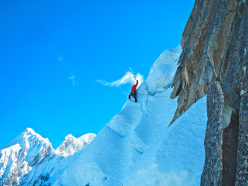 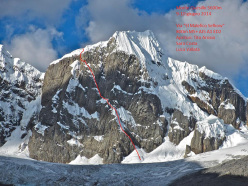 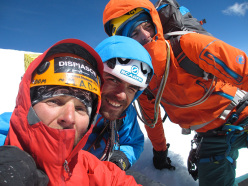 In June 2014 the three young Italian alpinists Tito Arosio, Saro Costa and Luca Vallata visited the Cordillera Huayhuash in Perù where they made the first ascent of "El malefico Sefkow", a new route up the West Face of Monte Quesillio (5600m). Furthermore, the three attempted climbs on Tsacra Grande, Siula Grande and Huaraca. 27-year-old Tito Arosio provides the details.

In June Luca Vallata (23), Saro Costa (25) and I have went on an exploratory climbing trip to the Cordillera Huayhuash, in particular to the southern part of this massif. The very same area described in the famous "Touching the Void" still has a considerable potential for new ice and mixed routes. Our base camp was located close to Lake Jurau and was shared with two other climbers: Carlo Cosi (26) and Davide Cassol (25).

After an initial acclimatization phase Saro and I attempted the virgin East Face of Tsacra Grande (5774m). After the gully, which marked the first half of the face and presented us with mixed sections (up to M6) and ice (AI4+), our attempt ended unfortunately circa 150m below the summit, due to the classic Andean snow conditions; this seemed too inconsistent and dangerous to breach the easy ridges just below the summit. We quickly abseiled down our line of ascent. We rested for a few days and then set off up a new route up the West Face of Mount Quesillio (5600m). This too had never been climbed before. The route we climbed over two days offered difficulties up to M5+ e AI5 A1 ED2 800m and has been called was named El malefico Sefkow. On reaching the ridge and joining the normal route we decide not to continue on to the summit due to do the danger of huge cornices. We descended along the normal route down the West Face. After a few days of bad weather all three set off up Siula Grande to repeat Noches de Juerga, the only route which seemed in condition. Unfortunately, the poor condition of the face coupled with high temperatures resulting in snow melting off the slopes and the high risk of cornice collapse stopped our attempt at approximately 5700m. The day before leaving base camp we made a quick raid up the West Face of Mount Huaraca, but this was stopped at mid-height; the route turned out to be much more challenging than expected and we didn't have enough aid gear for aid climbing. Nor did we have enough time: the arrieros would arrive the next day with their donkeys to transport our gear back down to valley. Even this small but very steep face remains virgin.
Thanks to: Alpine Club, firstascent.co.uk, CAAI e Ferrino for having supported this expedition
Luca Vallata thanks: S.C.A.R.P.A. Tito Arosio thanks: Grivel, Wild Climb and Grande Grimpe.
We would also like to thank Enrico Rosso, Franco "Cirk" Bertocchi for the information they provided. And finally, a special thanks to our cook Pio Polo and the arrieros Abner and Omar.