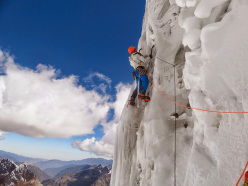 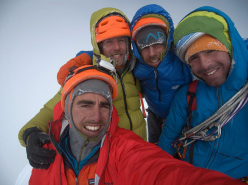 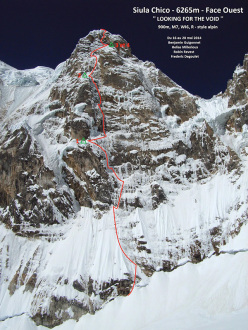 From 16 to 20 May 2014 the French alpinists Frédéric Degoulet, Benjamin Guigonnet, Hélias Millerioux and Robin Revest made the first ascent of Looking for the Void, a difficult new ice and mixed route up the West face of Siula Chico in the Cordillera Huayhuash in Peru.

There is practically no alpinist in the world who hasn't heard of Siula Grande, the formidable mountain in the Cordillera Huayhuash in Peru which witnessed one of the most dramatic events in mountaineering at the hands of Britain's Joe Simpson and Simon Yates, later brilliantly recounted in Simpson's bestseller Touching the Void.

Siula Grande's subpeak is called Siula Chico but at 6265m, "Chico" has little to envy of its slightly taller sister: first climbed in 1966 by a German expedition led by Manfred Sturm, only in 2007 was its summit reached for the second time by the Spaniards Jordi Corominas and Oriol Baro who established a new route up the inhospitable West Face, the same wall that had stopped the likes of Mick Fowler and Simon Yates in 1998.

The West Face has now been climbed by the formidable young French alpinists Frederic Degoulet, Benjamin Guigonnet, Hélias Millerioux and Robin Revest whose new climb has all the hallmarks of being a truly superb undertaking. Their 900m route tackles the West Face more directly compared to the Spanish line and was climbed, after 20 days acclimatisation, in pure alpine style from 16 - 20 May past difficulties up to M7, WI6 with the added grade R that indicates runout gear.

The team spent 4 nights on the face (one bivy at 5800m, another at 5980m and two nights spent at 6170m) and their new route - called Looking for the Void - is according to Degoulet "the hardest we have ever done. From a point of view of the continuity of the pure difficulty, the physical and mental commitment and the overall difficulty of the route. We know of nothing similar in the Alps. Climbing it in a single day seems impossible, without the consequences being tragic. The conditions could have been even better than those we encountered, even earlier in the season, but this might involve climbing under cascades of snow... because it' right in the middle of the rainy season."

For further information and photos check out: freddegoulet.blogspot.fr