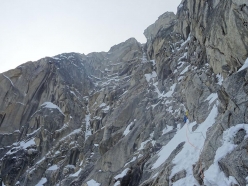 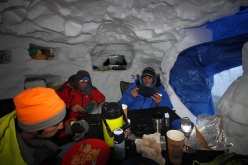 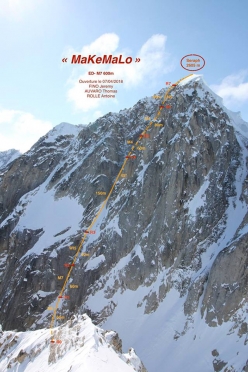 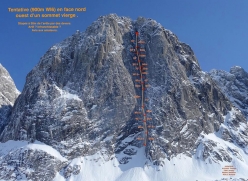 Having read Clint Helander’s stories about Alaska’s Revelation Mountains, it occurred to us that the “Revs” seemed to be the perfect place to fulfil our dreams of adventure and unclimbed walls. After days of preparing gears and food, a gorgeous flight with Paul Roderick and a warm welcome from Clint himself and Andres Marin, intent on climbing new route on Golgotha, we first had to deal with unsettled weather, heavy snowfall and furious winds.

When the first good weather window appeared, an obvious gully on an unclimbed summit to the north of the Apocalypse caught our attention. At 4am on 2 April we were at the base and started to climb. Entering this deep dyke was something like a mystical experience, and the pitches offered us incredible ice and sections of steep, hard-packed snow. After nine hundred meters and fourteen hours of climbing we were stopped below a 40m roof of black, compact rock. A hard pitch of aid-climbing pitch, or loose and illogical mixed climbing could have led us to the col and then up the easy final ridge, but that was not the way we wanted to end the route and so we chose to rap down. We were back at the base after a 24-hour round trip. So close, yet so far.

Bad weather then set in once more. We played the waiting game at basecamp. Cooking, listening to music, preparing the gear and doing a bit of skiing around the camp was our daily routine. Fortunately three days of good weather were predicted just before the plane was scheduled to lift us back out. Due to frostbite to my toes I’d got while skiing back to camp I had to let my friends go climb on their own, and did whatever I could to support them.

A day after skiing the South Face of Sylph, Antoine, Thomas and Jeremy attempted the direct gully up the NE Face of Seraph. Six hundred meters of climbing including some technical mixed pitches at the start led all the way to the summit. They followed an obvious corridor back down to the base and returned to basecamp 14 hours later to enjoy a good meal and a small glass of whiskey. Nice day out!

Last day, last try! The idea was to return to our first unclimbed summit and establish an easy route up the mountain’s South Face, but a strong and warm wind forced us to change plans. We examined possibilities on drier North Faces and on 9 April the guys went to the NE Face of Hydra. Climbing past multiple pitches of delicate mixed terrain along a diagonal ramp they managed to reach the summit at dawn to enjoy an unforgettable view across the endless wilderness of Alaska. The excitement was evident on our four faces when we all rejoined after this last beautiful day.

We were picked up by Paul the next morning, the time had come to go home. But we were all already talking about when our next trip would be…

The team wishes to thank Petzl, SCARPA, Blue Ice and Chullanka for their support to the team and the project.
Antoine is sponsored by Petzl , Karpos, SCARPA, Blue Ice, Masherbrum and Snowleader