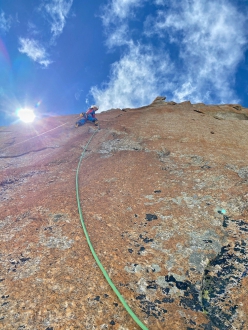 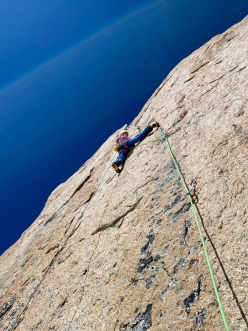 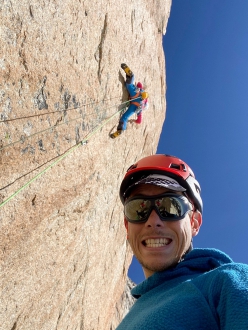 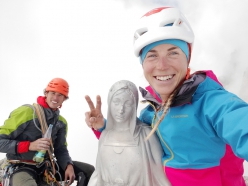 Federica Mingolla has just completed a two-day trip into the Mont Blanc massif which will no doubt be remembered for quite a while: on Friday 17th July with Lorenzo Pernigotti she repeated the historic Via Ratti - Vitali on Aiguille Noire de Peuterey, while on Saturday with Leonardo Gheza, she made an inspirational first repeat, all free and leading all difficult pitches, of Incroyable located on the Red Pillar of Brouillard, the superb route established and freed only a few days ago by Matteo della Bordella, François Cazzanelli and Francesco Ratti. The 25-year-old provides the following information.

INCROYABLE - FIRST INTEGRAL ASCENT by Federica Mingolla
The phone rang and a number popped up that I didn't know, it was famous "Leo Gheza" whom I’d heard so much about from Matteo Pasquetto. Leo asked me if I had plans for the weekend and told me he’d like to climb something in the Mont Blanc massif.

Just as a thousand ideas sprung to mind I remembered that I’d promised to help Mauro Opezzo at the Monzino hut on Thursday and Friday evening, so I started thinking about how to make the most of this opportunity.

Only a super optimist like me could come up with the following unrealistic, albeit theoretically perfect, plan. And this is what the puzzle looked like: on Thursday I’d go to the refuge and work there in the evening, on Friday I’d climb Aiguille Noire via the classic Ratti Vitali route with my boyfriend Lorenzo Pernigotti and return in time to serve dinner at the hut, then at the weekend I’d ascend to the Eccles hut with Leo to try our project, namely the first repeat of the brand new route Le Incroyable on Pilier Rouge.

Friday the 17th didn’t make fun of us and after fleetingly greeting the Madonnina statue and 22 abseils back down the Noire, we returned to the Monzino hut just in time to serve dinner. I finally met Leo for the first time and despite feeling tired after a long day in the mountains, I felt fully charged for two more days climbing with him at altitude. As always the alarm rang at 3 am and after a quick coffee at the Eccles huts, at 7:30 we started up the route just as the sun hit it. Perfect timing!

The first pitch is masterpiece, a reachy 7a past small crimps which provides the wake-up call, and this is then followed by easier pitches that lead to the ledge at the base of the King Pitch: the 8a crux. I haven't tried many routes this hard at altitude and it's always nice to see how much you can learn on granite.

The first attempt was painful for both Leo and myself. Defeated and without even reaching the belay we looked miserably at each other on the ledge: perhaps this wasn’t going to turn out perfect, but at least we were in an absolute unique place!

After a short rest I set off again, this time armed with a maillon rapide, convinced I’d have to bail from my previous highpoint and that we’d have to abandon this project. I can't really explain what happened next, but after battling for a few minutes oon the moves that had given me so much trouble a few minutes earlier, suddenly I found myself below the crux where previously I’d been forced to raise the white flag.

A cloud arrived and as I rested on two holds I looked down at Leo and exclaimed ironically: "Here comes the friction!". I started up a sequence that I’d only imagined before and, just like in a dream, I managed to reproduce it on that perfect granite. I reached the belay grinning in disbelief and joy! From below Leo yelled up at me: "Take in all the slack, let’s continue to the top!"

And so after a quick high-five we continued up the next pitches, this time without swinging leads so that I could make a complete free ascent. At 16:30 we are already rapping down the abseils, fast as lightning!

Leo turned out to be a great climbing partner, being with him was a really positive first experience for both of us, what surprised me most was his positive attitude and the fact that he enjoys the mountains for everything they offer you. The grades we attribute to certain routes, or the fact that we manage to climb them or not, cannot replace the pure pleasure of just being there, and Leo knows this full well. So there we were, on one of Mont Blanc’s red granite castles in the sky, admiring the surrounding landscape. I’m certain that, in that moment, both our hearts were full of joy.

Thanks to Leo for the super weekend, which actually boiled down to just one day on the pillar, and thanks to Matteo della Bordella, Francesco Ratti and François Cazzanelli, the first ascensionists who did such a great job at establishing Incroyable.