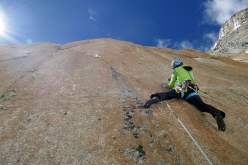 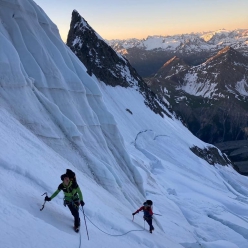 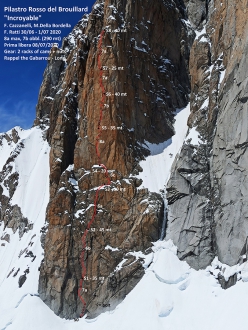 Matteo Della Bordella, president of the Ragni di Lecco mountaineering club, reports about Incroyable, the superb and difficult new route on Red Pillar of Brouillard (Mont Blanc) first ascended on 30 June and 1 July with Matterhorn mountain guides François Cazzanelli and Francesco Ratti. The first free team ascent was carried out on 8 July 2020 by the trio with fellow mountain guide Isaie Maquignaz on 08/07/2020.

On closer examination, alpinism tends to disprove commonly held beliefs. At least, that type of alpinism that takes to the mountains in order to "climb" mountains without too much ado. Perhaps this is the key to understanding this (incredible) new climb established in the heart of Mont Blanc. Indeed, in one of the mountain’s most celebrated “sanctuaries”, the Red Pillar of Brouillard. A place as magnificent as it is wild. Just reaching the base of the pillar is an arduous undertaking, especially if, as in this case, you do not spend the night at the "Eccles" bivouacs. After the monument climb established in 1959 by Bonatti and Oggioni and the other 3 major routes that followed suit - Via dei dilettanti put up by Flaviano Bessone, Ugo Manera, Isidoro Meneghin and Mario Pellizzaro in 1980; the x Patrick Gabarrou and Alexis Long Ditettissima put up in 1983; and, in 1989, Les Anneaux Magiques forged by Michel Piola and Daniel Anker - who could think that there was still room for another route? Only mountaineers, is the answer that perhaps Riccardo Cassin might have given. So, simply, Matteo Della Bordella came up with the idea. Since his usual climbing partners were all busy, he talked to François Cazzanelli and Francesco Ratti (two of the strongest mountaineers) and a completely new (extremely competent) partnership was created. In two days, starting from the Monzino hut, they climbed a new route ground-up that that promises to be both beautiful and hard, right up the center of the Pillar, between the two masterpieces "Gabarrou-Long" and "Anneaux Magiques”, with which shares just 4 meters right at the end. A week later the trio returned with Isaie Maquignaz, another Matterhorn guide, to make the first free ascent. Della Bordella freed the 5th pitch, graded 8a, which resulted in an epic run out during the first ascent. Cazzanelli and Ratti freed the subsequent hard pitches. The numbers speak for themselves: 290 meters established ground-up, with very few bolts (20 on the pitches + 1 at each of the 8 belays), past obligatory 7b climbing and maximum difficulties in the region of 8a, at circa 4000 meters above sea level. Future ascensionists will confirm the route’s obvious beauty and its difficulty. In the meantime here's what Matteo Della Bordella had to say about Incroyable. About the new and hitherto unthinkable line up the Red Pillar of Brouillard.

Establishing a new rock climb in my favorite style, on the most beautiful granite of Mont Blanc, was a dream I’ve pursued for many years and which, by now, I’d almost abandoned. My ambition was to leave my own mark on these mountains, but I was worried that it wouldn’t be particularly logical or, worse still, would ruin these rock faces steeped in climbing history.

After having repeated the two existing routes on the Red pillar of Brouillard, namely Anneaux Magiques by Piola and the extremely direct Gabarrou-Long - a logical and beautiful masterpiece first ascended in a traditional manner right up the center of the pillar - I said to myself: "Carpe diem". The line I’d always been looking for was right there, and it the time had come to give it a go: now or never!

Furthermore, due to the Eccles bivouacs allegedly being closed this summer as result of the Covid pandemic, I reckoned the Pillar would probably be even more fascinating and isolated than it already is. As it stands, the location is already one of the wildest corners of the Mont Blanc massif.

After phoning my friends and usual climbing partners, and having realised unfortunately that they were all busy, I immediately saw this as an opportunity to create a new team. On the spur of the moment I followed my instinct and phoned François Cazzanelli who was on his way home from a training climb on Mont Blanc with Francesco Ratti. Although François and Francesco and I had only sport climbed before, and despite the face that they’re known above all for their impressive speed ascents or tough mixed climbs at high altitude, I knew they’re both excellent rock climbers and that they’d like my idea; I couldn't wait to share an adventure in the mountains with them!

After spending the night at the Monzino refuge with our friend Mauro, on 30 June we set off on this project together, an undertaking during which each of us contributed with some of their personal experience and style. François got the ball rolling on the technical slab and the line I’d conjured up in my mind slowly unfolded beneath our our fingertips as we took turns swinging the lead.

When we reached the base of the obvious red face, where the wall steepens, I was given the honour of establishing the fifth pitch. I’d imagined this to be the heart of the entire line and, spurred on by enthusiasm, I did my very best to free climb as much as possible and place only the occasional bolt to connect the series of cracks. Shade had crept over the pillar for a few hours and it was now Franceco’s turn to continue upwards, following a spectacular corner past a series of technical moves protected by micro wires and a few, sparse bolts. When night fell we abseiled down to the base of pitch 5 and settled in for a comfortable bivy.

On Wednesday 1 July we then completed the last two pitches, up fantastic rock and past varied climbing once again, to reach the top of the Red Pillar’s first summit, which is where Anneaux magiques ends, too

Despite our dignified first ascent, celebrated with a lavish plate of spaghetti cooked by Mauro at the Monzino refuge, and despite the 2300m descent back down to the valley across at times fairly complex mountain terrain, the route still lacked a first free ascent.

We returned to complete the job a week later, on Wednesday 8 July. This time the three of us were joined by Isaie Maquignaz, and this enabled us to form two independent teams; this was my lucky chance to concentrate fully on pitch 5 without wasting too much time for François and Francesco. The fifth pitch is extremely technical, has some hard obligatory climbing interspersed with some  good rests (thankfully, since it’s at almost 4000 meters above sea level). The final crux is vertical and revolves around two tiny crimps, certainly less than one centimeter wide, which provide a complex mental and physical test.

I checked out the moves then made a first proper attempt, but when I got to the two edges, something was completely wrong… I crimped hard instead of caressing them gently and suddenly found myself dangling off the rope a few meters lower. A second attempt resulted in much the same, while after a good rest my third and final attempt proved to be the one: I climbed far more relaxed and fluidily, my fingers remain literally glued to the holds and I reached the belay. In the meantime Francesco and François had freed the beautiful pitches above and even if it was only 3 in the afternoon, we were more than satisfied with our achievement: what a wonderful team effort, everyone has freed the pitches they’d established!

The route is completely independent, with the exception of 4 meters of the last pitch shared with Anneaux magiques. It tackles a line up the center of the pillar, parallel to the route put up by Patrick Gabarrou. The way in which this entire adventure unfolded was so incredible that none of us could truly believe we’d just added a new route to the legendary Red Pillar of Brouillard. So incredible indeed that we called the route Incroyable; I’d constantly thought of this word and it was almost a joke since I’d promised myself I wouldn’t give the climb a French name... The most beautiful climbs and rock faces on Mont Blanc are on the Italian side of the massif!

10.05.2020
Not so far #1, Hervé Barmasse, Eneko & Iker Pou climbing the Brouillard Pillar on Mont Blanc
The first of three episodes of the film Not so far featuring Italian alpinist Hervé Barmasse and his 2011 first ascent with Spaniards Iker Pou and Eneko Pou of La Classica Moderna up the Left Pillar of Brouillard on the Italian side of Mont Blanc.