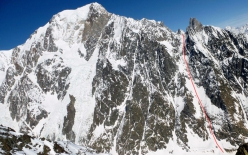 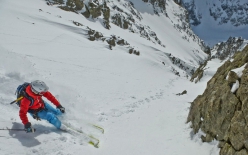 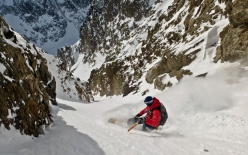 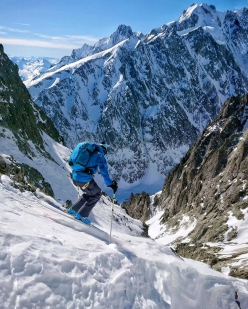 Davide Capozzi introduces the SW Couloir of Col du Brouillard in the Mont Blanc massif, recently descended on snowboard and ski with Alessandro Letey. Also referred to as Voie du 1894, in 2016 Capozzi made the first known descent with Michèle Curtaz and Federico Camangi.

I consider the Miage glacier as one of my favorite places to ride. Among friends we call it the "Couloir Park", because of the vast number of couloirs that face varying directions and have varying angles. The fact that it is hard to access means that it is not very popular, although in recent years many skiers have discovered the potential of this place and have started to go there more often.

In March 2016 Michèle Curtaz, the mountain guide Federico Camangi and I skied the SW Couloir which descends from Col du Brouillard towards the Miage glacier. Ascended for the first time in 1894, it was one of the last obvious gullies that I had not yet descended on the SW side of the Brouillard ridge.

The couloir is not particularly steep, but is over 1000m long. A good reason to give it a go therefore! Four years ago, when we carried out the first recorded descent, conditions were nothing short of perfect.

Since then the gully has been repeated a few times, but actually not too often since it extends southwards for over 1000 meters, with the lowest point at an altitude of circa 2000m meaning that the snow transforms quickly and avalanches come in from the side, quickly devastating the lower half.

I returned this year with Alessandro Letey who hadn’t skied this couloir yet. Conditions were decidedly different compared to 4 years ago: hard spring snow in the morning which enabled us to ascend rapidly, and soft snow in the early afternoon that provided a pleasant descent.