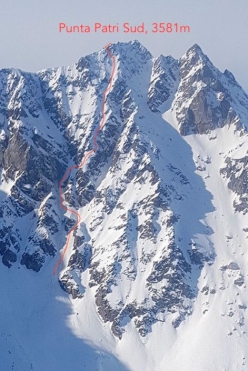 On Monday 13th of January 2020 I was at home trying to think of where to ski despite poor conditions after three weeks without any snowfall. It’s then that I saw a picture taken by Laurent Dupré of the south face of Punta Patri in the Gran Paradiso massif.

As per usual I decided to go there on Thursday the 16th of January just to see if this line could perhaps be skied. I woke up at 3 am on the 16th and headed towards Cogne valley, and then set off from the Lillaz car park at at 6 for the circa 9km approach.

At 8.30 I reached the base of of the main couloir that descends down the south ridge, and three hours later I was in the summit, after having beaten a trail past some non-consistent (but very safe) snow. I had taken a 60 meter rope and some Friends just in case, but I didn’t have to use them.

The first part of the descent was steep and powdery, a weaving line past some hidden rocks that I’d noticed during the ascent (around 50-55°, 100m). Then I entered the suspended couloir, very beautiful and with some sections that provided some fine skiing (around 45-50°, 300m). The most technical but also the most beautiful section was connecting this couloir to the next, down a rapid succession of very steep turns through good powder (55°). After a last suspended slope and a long traverse I finally reached the main couloir again. Just before 13:00 I was back at the car.

I called the descent Linea senza frontiere because I believe there are still lots of lines to open and also because of the complexity of this route.