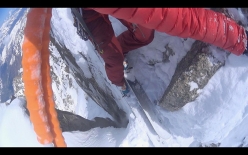 Aiguille Verte: Paul Bonhomme on the upper traverse of Nant Blanc during a reccie a week earlier
Photo by Paul Bonhomme 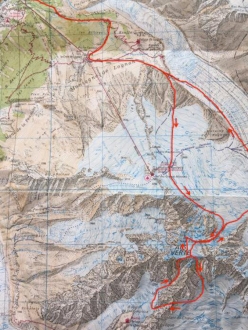 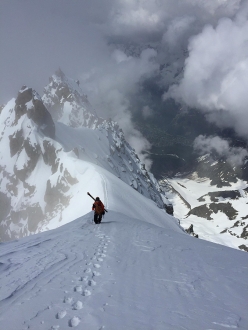 French mountain guide Paul Bonhomme has completed his project of climbing and skiing 4 different faces on the Aiguille Verte (4122 m) in the Mont Blanc massif on the same day.

On 18 May French mountain guide Paul Bonhomme completed his ambitious project of climbing and skiing four different, complex faces on Aiguille Verte in the wild heart of the Mont Blanc massif in a single day.

Setting off from the valley at Argentiere, the 42-year-old ascended the North Face via the Couturier Couloir before skiing down the Whymper Couloir on the SE Face, on extremely hard snow. After having crossed Brèche S du Cardinal Bonhomme then took off his skis and, joined by Vivian Bruchez, ascended Y Couloir. At the top the original plan had been to descend Nant Blanc, but conditions proved prohibitive and the duo chose to plunge back down the Couloir Couturier.

As Bonhomme stated, this project was very much an “immense journey exploring the history of alpinism and steep skiing.” Having followed in the footsteps of Mummery, Whymper, Armand Charlet, Saudan, Tardivel, Chauchefoin, Vallençant and Bau, it’s easy to comprehend why.