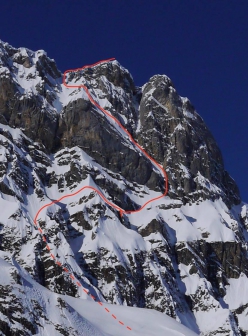 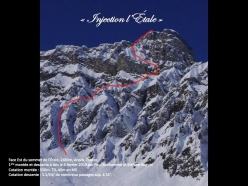 On 6 February 2019 French alpinists Paul Bonhomme and Stephane Roguet made the first ski descent of the East Face of Mt. Étale in France.

On Wednesday 6 February 2019 French alpinists Paul Bonhomme and Stephane Roguet claimed the first ski descent of the East Face of Mt. Étale, an important peak in the Aravis range of France’s pre-Alps.

The duo teamed up early in the morning and spent 4 hours ascending a 550m line towards the 2483m summit. "The climb was hard, exposed and complicated" Bonhomme told planetmountain.com, and the ascent in itself was graded TD with one 40m section of M5. After resting briefly on the summit they descended via the line of ascent, for which Bonhomme commented "the snow was exceptional and we had powder on more than 55° steep slopes…"

These prime conditions enabled the two to ski the weaving line with just one short rappel, and Injection l’Étale has now been graded 5.5/E4. Mountain guide Bonhomme explained "I believe I now have a good idea about the difficulties in steep skiing and although the face is quite short (550m), the exposure, the steepness and the concentration that it required were quite unusual. I suggested 5.5/E4 because to date nobody has ever suggested anything harder, and because the snow was perfect. But on Wednesday we reached the upper limits of 5.5 …"

It goes without saying that both Roguet and Bonhomme are extremely talented alpinists. While Roguet has numerous descents to his name across the Greater Ranges (and sports climbs up to 8b), Bonhomme made headline news in June 2018 when he teamed up with Vivian Bruchez to make a rare descent of Nant Blanc on Aiguille Verte in the Mont Blanc massif. This came about shortly after having skied all four different faces of the 4122m mountain in a single day.