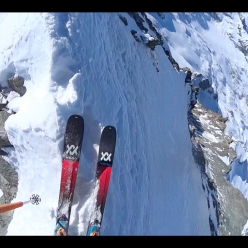 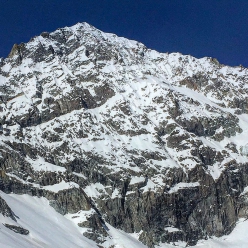 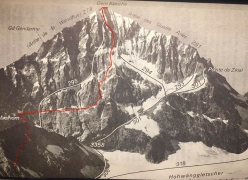 French mountain guide Paul Bonhomme has made what is likely to be a new ski descent down the East Face of Dent Blanche in Switzerland.

On 27 February 2019 French mountain guide and extreme skier Paul Bonhomme made a remarkable ski descent of the East Face of Dent Blanche, the formidable 4357m peak in the Valais region of Switzerland.

After failing to find parters willing to share the adventure, Bonhomme ascended the face in the early hours of Wednesday on his own, topping out at around 11. He rested briefly in excellent summit conditions and then dropped back down the extremely exposed face., following the line of ascent The 1100m line is called Nico, taking after Paul Bonhomme’s elder brother, and deals with 45-50° terrain. Only circa 100m are shared with the route skied by Gilles Serro in 2015, and it is believed that Bonhomme’s decent is now the first integral descent of the face.

Bonhomme has made headline news in recent weeks, notably for his new line down Mt Étale in France skied with Stephane Roguet, and his 2018 descent of skied all four different faces of Aiguille Verte in the Mont Blanc massif in a single day.