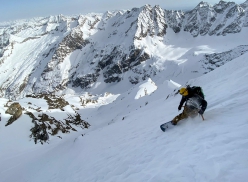 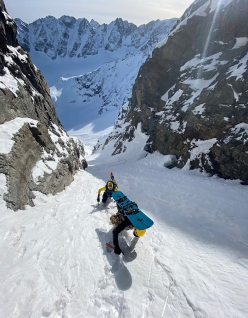 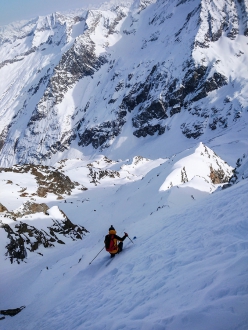 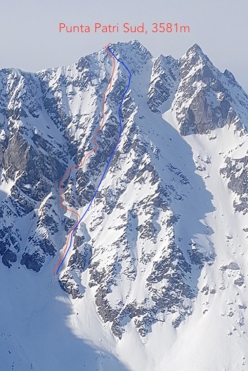 A few days after the remarkable descent carried out by Paul Bonhomme, Davide Capozzi, Alessandro Letey and Mike Arnold have traced a new line down the south face of Punta Patrì in the Gran Paradiso massif. Capozzi reports.

On 16 January while ascending the couloir on Valeille Orientale… I observed the SE Face of Punta Patri Sud and quite liked the idea of trying to ski a line down this face. Back at home I then read about the descent carried out by Paul Bonhomme on the very same face, just one day earlier.

The first thing I thought was that if Paul had travelled this far, based on nothing more than a photo he’d seen on facebook, then it meant that he too was having the same trouble as us this season and had run out of ideas of where to go skiing. His descent was undoubtedly both beautiful and demanding, one which probably only his eye could envisage.

For my part, I had noticed a line down the central couloir, even though it was unclear whether this could be skied throughout. So for the third time in 10 days I returned to never-ending Valeille together with my friends Alessandro Letey and Mike Arnold with the aim of giving it a try. Our fallback was the adjacent valley that would have led us to the summit in any case.

The canyon was surprising, in terms of beauty, and the top slope, the steepest, was perfectly covered with snow and allowed us to reach the last gully below the summit via a traverse.

The start of the descent certainly provided us with the curves this season, down steep and exposed slopes. Once we reached the canyon the skiing wasn’t simple due to the frozen snow, but the beauty of the line made us forget the effort we had to put in here, then the angle eased off and we easily reached the base of the face.