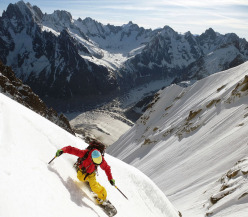 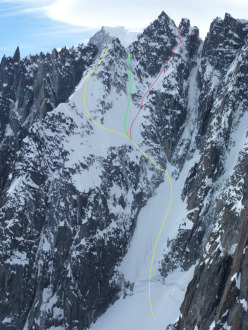 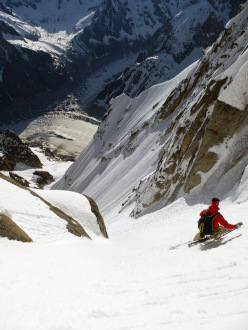 David Capozzi reports about the 10 May first snowboard and ski descent, carried out together with Julien Herry and Francesco Civra Dano, of the entire Voie Originale down the North Face of Pain de Sucre, Mont Blanc.

Just when many consider ending the ski season and starting rock climbing, in comes the following news: last Sunday Davide Capozzi, Julien Herry and Francesco Civra Dano made the first ever descent of the entire Voie Originale down the North Face of Pain de Sucre in the Mont Blanc massif. It was on this important face that extreme skiing history was written with the first ski descent carried out in 1990 by French ace Pierre Tardivel. Since then the line has seen only a handful of repeats, while in 2009 Andreas Fransson, Arne Backstrom and Tobias Granath added a new variation. Capozzi, Herry and Civra Dano have now added another variation to Tardivel’s descent: the entire Voie Originale. In effect, half of this descent is a completely independent line and, better still, it starts even higher up, just below the summit of Pain de Sucre. After years of waiting, last Sunday the three ascended from the other side, crossed the col and looked down into the great void to tackle the uncertainty of a line that has all the hallmarks of being a great descent.

The North Face of Pain de Sucre is a legendary place that has shaped the history of extreme skiing on Mont Blanc. The first ski descent was carried out by Pierre Tardivel on 1 June 1990 with two abseils down the most logical line (marked in yellow). The first repeat happened a mere two days later, at the hands of Dédé Rhem on skis and Jerome Ruby on snowboard. Since then the line has had few repeats, perhaps only a dozen or so.

Most of these descents were down the line chosen by Tardivel that could be defined as a variation to the "Voie Original", the route first climbed by Robert Gréloz and Francis Marullaz in 1931 (marked in red). In 2009 Andreas Fransson, Arne Backstrom and Tobias Granath added an upper variation with one abseil to reach "Pain de Rideau” (marked in green).

In 2013 Julien "Pica" Herry, Luca Rolli and I skied this beautiful and challenging descent via the "classic" Tardivel line. After that our focus shifted to considering whether it would be possible to ski the entire Voie Originale; the idea seemed beautiful because this route leads directly to the summit of Pain de Sucre and, in addition, it had never been skied before.

Imagining things is always nice, but when you'rer faced with reality things can be quite different. During the last two years although the face was in condition, the upper section of the Voie Originale was not. Incredibly, right from the start of this winter snow remained up there and the problem was that poor conditions down the rest of the face made a descent prohibitive. Then May started very wet in the Mont Blanc massif, for days it never stopped raining and the high temperatures helped the snow to stick to the slopes.

We’d pushed the idea of Pain de Sucre a little aside, thinking that by now it was too late in the season, but then all of a sudden two young skiers from the Chamonix valley (Lambert Galli and Jules Berger) skied the face and found incredibly good snow conditions. Thanks to the information these two talented skiers gave us Julien and I decided to attempt our Voie Originale descent. We were joined by our friend Francesco Civra Dano who didn’t think twice about accepting our invitation.

After a sleepless night at the Cosmiques hut, at 4 am we begin to tackle the Midi - Plan Traverse and at 7:00 am we reached the start of our descent. The access gully was topped by a frightening meringue of snow, Francesco dug a way through and then finally we managed to see the start of the main couloir. The snow didn’t look great and the exposure was massive!

We rigged a belay, Francesco decided to rappel with crampons and check the snow conditions: hard and frozen solid. Julien and I stepped into our snowboards and we too abseiled down this first part to reach the only rocky step. After a 30 meter abseil we began our descent. The entire first part of the line follows an east-facing gully, the snow was still hard but skiable, it was amazing to see that we were skiing down the exact opposite side from where we'd skied in 2013.

We entered Pain de Rideau, the snow wasn’t the easiest and we often had to deal with hard crust covered by winter snow. The slopes were steep, constantly. We reached the mixed section which marked the end of the difficulties, a delicate icy section which left no room for error. Finally we reached the finishing slope that, although still steep, enabled us to enjoy the beautiful corn snow a little more.

Another great adventure down this splendid north face, shared with Julien who more than anyone else had envisaged this beautiful line, and with Francesco who is always motivated when it comes to doing something committing.