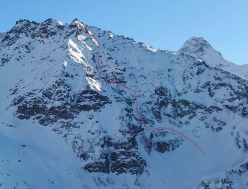 On 08/01/2020 Davide Capozzi and Alessandro Letey descended Trident de Comboé in the Aosta Valley, Italy. This may well be the first ski and snowboard descent of the exposed West Face. Capozzi provides the details.

During this period of high pressure we’re often out and about searching to score some steep lines in some soft snow, but this is also a great opportunity to look around and search for something new.

Five days ago I was up in the Comboé valley, just a few kilometers from the Pila ski resort, and I glanced up at a face I’d noticed last year. I’d actually noticed it last year but, as so often, I’d forgotten about in the meantime. Now though, given the unfavorable weather forecasts, I thought that I could go and check out the descent.

I teamed up with Alessandro Letey and we decided to have a look at the north face of Mt. Emilius and after a couple of hours we caught sight of the mountain’s imposing north face. The initial plan had been to to try and ski the NW gully, as I’d done with Julien Herry in 2015. Unfortunately though conditions were not inviting and we decided to change plans.

We didn’t have many viable alternatives, but the idea of ​​going to check out the descent of Trident de Comboé was one of them, even though we knew we might have to bail a second time that day. We quickly made our way to start of the ascent that leads to the base of the face. The only photo I had didn’t show if there was a line that led all the way to the summit. We started upwards and a cascade of ice immediately barred the most obvious way up. We continued though and thanks to a small hidden downwards leading ramp we managed to avoid this icefall. From there a series of gullies and more exposed sections led to the top.

The descent proved never particularly steep, and while the exposure was real it didn’t actually feel that way and it turned out to be a relaxed run down. Thanks to our first failure earlier that day, for once we managed to take advantage of the afternoon light as we made made our way down the west face, enjoying the views onto the Mont Blanc massif all the way to the final traverse below the wall of ice.

The approach from the Pila ski resort is not particularly long and I believe that the face is plastered in snow almost every winter. For those who love this type of skiing, this could easily become an interesting itinerary worth doing.