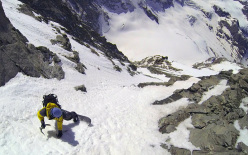 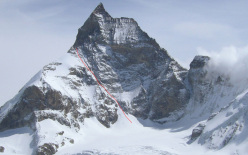 On 17 April 2014 Davide Capozzi, Julien Herry and Francesco Civra Dano descended the West Couloir of the Zmutt Ridge on the Matterhorn, Switzerland.

A first ski and snowboard descent? Possibly. But this, believe us, really is nothing but a minor detail. The line is so beautiful that “we simply had to go and ski it.” and happend to be located on a mountain that is a true symbol of the Alps, the Matterhorn. Davide Capozzi provides the details of his latest experience on the mountain's Swiss face.

I've always wanted to ski this magnificent mountain. We're deeply indebted to our friend Manu Gross, a snowboarder from Diablerets, keen extreme skier with numerous descents to his name across the Alps. Manu had observed this fantastic line that runs down the West Face of the Matterhorn: a 800m high gully that starts from the Zmutt teeth, along the famous Zmutt Ridge.

We began to find out more, I spoke to my friend Hervé Barmasse who confirmed that the descent was feasible and he warned me that it could turn into a long day out in the mountains. Unfortunately we were tied to the weather conditions: high winds initially, and a subsequent period of unstable weather, forced us to choose only day only: Thursday 17 April. Many couldn't come that day but kindly said we should attempt it without him.

Julien Herry, Francesco Civra Dano and I set off at 4 in the morning from Courmayeur to Zermatt. After getting off the train that had departed from Täsch we reached the lifts and waited for them to open. All we needed to do was ascend to Schwarzsee as our approach began from there, passing beneath the North Face and below the Zmuttgrat. Things ran smoothly and at 11:30 we breached the first of the two Bergschrunds, not beautiful but nevertheless crossable. The gully was long but the hard-packed snow helped us make swift progress.

At 15:00 we strapped on our skis and snowboards, the snow on the upper section had only softened a little, while the lower we got the more skiable it became and it was almost fun. With the help of the rope we crossed the two Bergschrund and reached the base of the gully in less than an hour. All we needed to do now was descend to Zermatt by following the numerous tracks, most of which had been left by those doing the classic Chamonix – Zermatt.

The day seemed to come to an end, but the unexpected closure of the Mont Blanc tunnel forced us to return to Switzerland and travel through the St Bernard Tunnel. At 2 in the morning we were finally back home... it had been a long day.

According to the local guides it seems as if this gully had never been skied before, let snowboarded. For us this is only a detail, we cannot but be overjoyed with our first experience on the Matterhorn.