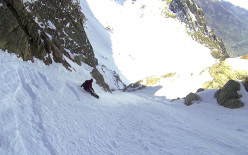 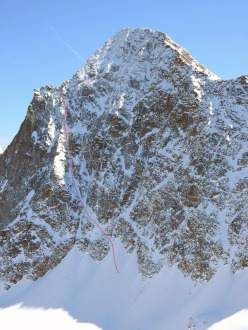 Davide Capozzi reports about the first snowboard descent (and possible first overall descent) of the NW Couloir on the North Face of Mount Emilius, Valle d’Aosta, carried out with Julien Herry on 13/04/2015.

Unknown to most, Mount Emilius is the mountain that overlooks the city of Aosta. In 2013 Julien "Pica" Herry and I skied the North Face of Becca di Nona and on that occasion we couldn’t help but notice the huge north face of Emilius. Making a complete ascent of this frightening face seemed like an immense dream, and finding the right conditions seemed like something even bigger still.

Last week a friend of mine happened to send me a photo of the face, taken from the summit of Becca di Nona. This picture rekindled my desire to check it out for myself and I reckoned that snowboarding the main gully would prove highly satisfying in itself, without making an integral descent from the summit. Julien immediately agreed, he too wanted to give this beautiful peak a go.

On Monday 13 April we set off from Pila at 5:30am; after about six hours we topped out on the NE ridge at an altitude of 3370m. From here, with two short rappels, we began our descent. The city of Aosta dominate the scenery below, despite the summit towering 200m above us. The view view was spectacular and it was great to be up there on our snowboards.

The descent was steep and exposed: a 450m slope/gully around 50° at the start, then slightly less down the rest of the couloir. Unfortunately the snow wasn’t ideal: the warm spring sunshine followed by the cold nights had frozen the snow solid. For it to have been a fun descent we would have had to wait to at least mid-afternoon, but we reckoned that at that point the return to Pila would have been too dangerous.

We decided to wait a bit, but not too much, just enough to let the first rays of sun can reach the face to have a little more light. The descent proved very challenging but, despite conditions being far from ideal, we managed to ski more than we expected. We imagined what it might be to ski this wonderful gully with perfect winter snow.

After about an hour we finally reached the base of Emilius: all we had to do now was return. I believe that with the various ascents and descent up terrible snow we took just about as much to return as we to get there.

After our descent both Julien and I were really happy indeed, even if for the moment our dream of skiing Emilius from the summit remains locked away. Who knows whether one day we’ll unlock it!