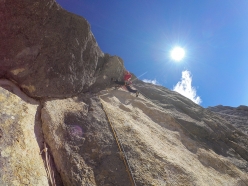 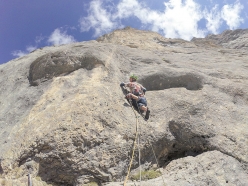 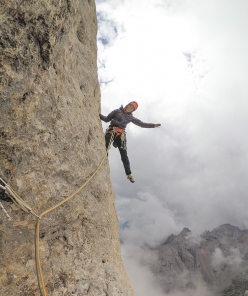 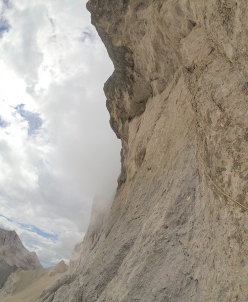 Interview with Italian climber Federica Mingolla who teamed up with Nicolò Geremia to repeat Via della Cattedrale (8a+ max, 800m), the famous climb up Marmolada, Dolomites

After her repeat of Chimera Verticale up Civetta at the beginning of August we wrote that we would probably hear from Federica Mingolla again this summer, and the news just in is that the Turin-based climber has now repeated Via della Cattedrale on the South Face of Marmolada. This 800-meter masterpiece was first ascended in 1983 by Graziano Maffei, Mariano Frizzera and Paolo Leoni without bolts and with difficulties of up to 6+ and A4, and freed in 2004 with difficulties up to 8a+ by Pietro dal Prà and Michele Guerrini. In recent years the route up the South Face of Punta Rocca has transformed into a coveted mountain testpiece for many, including Florian Riegler (2009, first repeat), Hansjörg Auer and Much Mayr (2009, first onsight), Jacopo Larcher and Barbara Zangerl (2016, first female ascent). A climb of this stature couldn't escape the attention of Mingolla who, after the first female of the Fish route - Via Attraverso il Pesce in 2016, evidently has a special feeling with theses "silver slabs" of the Dolomites.

Federica, you returned to the South Face of Marmolada. Why?

I was curious as I’d heard so much about the route. Nicolò Geremia and I decided to give it four days, in the end we needed only three. I didn’t expect things to go so fast!

So how did they go?
On the first day we started climbing late, it had rained and we waited for the wall to dry. We climbed the first 6 pitches swinging leads, I seconded the difficult pitches. Then it started hailing and we bailed.

The next day?
The next day we said to ourselves "Why don’t we just see how things go?" So we packed our gear for a bivouac on the face and went up with haulbag. This time we switched roles: I led the difficult pitches I’d seconded the day before, and onsighted the 7c pitch.

The crux 8a+ pitch is before you reach the bivy ledge, right?
Yes. A beautiful pitch, S-shaped. Actually, I didn’t know if it was one long pitch, or if you had to split it in two below the roof. I didn’t onsight the first section and stopped below the roof at the intermediate belay, as I didn’t know it was climbed as a single pitch. After a short rest I then onsighted the upper section of this pitch.

Did you rappel and climb it again?
Well no, we continued on up the other easier pitches to reach the belay. The night at the bevy was damn cold, perhaps the coldest in my entire life! The next day we continued to the top. We climbed in a whiteout, unfortunately the clouds were very low.

Then you abseiled back down the route?
Exactly, and while abseiling I decided to take a look at the crux pitch, just to see how it would go. I climbed up to the top of the second section, a difficult boulder crux off some underclings, but the rope drag was simply enormous!

And?
I switched my brain off. I gave it all I had, did a really high heel hook and managed to get established above. The huge scream was a mix of despair and happiness!

Then you're abseiled off. Have you thought about returning sooner or later and doing the entire route from bottom to top, in its logical order?
In all honesty, the idea of climbing the crux pitch again, from the bottom of the route to the top makes little difference to me. The important thing is that I managed to free it. Had I not succeeded, it would have been a repeat nevertheless, just not free. This is my point of view, everyone is obviously free to see things as they wish.

An obvious question, how is the route?
Amazing! Every pitch is special, you never get bored. Verdin-Like slabs are followed by sections similar to the Tre Cime di Lavaredo, with small cube-shaped rock which you have to be careful not to snap, followed by goutte d’eau and smeary slab climbing… all above a great void. It’s really beautiful. I tried to imagine the first ascent in the early 1980’s with the help of aid through the huge roof, crazy! And congratulations to Pietro Dal Pra for bringing this gem back into the limelight.

Satisfied?
Very. I went there just to see how it was, I was curious. I didn’t expect anything but managed to climb it second go. It's a good stamina test, but also a psychological challenge. You have to remember that you're up in the mountains, not down at a sports crag.

06.08.2009
The biggest cathedral in the world: Florian Riegler and Via della Cattedrale on the Marmolada, Dolomites
Last June Florian Riegler, climbing with Rebecca Finch, climbed "Via della cattedrale" (max 8a+, 21 pitches) on the South Face of the Marmolada in 12 hours. This is probably the first repeat after the first free ascent at the hands of Pietro dal Prà five years ago. But above all, as Riegler explains, this is the most beautiful climb he's done in the Dolomites.