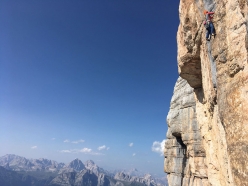 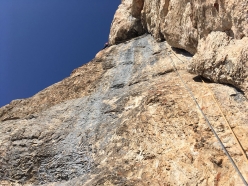 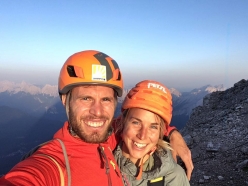 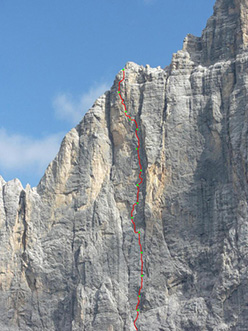 Federica Mingolla back in the Dolomites. After having made headline news last summer with the first female ascent of Via Attraverso il Pesce - the famous Fish route - on the South Face of Marmolada, now the climber from Turin has returned to the Eastern Alps to check out Mount Civetta for the first time. This mountain, as we have stated repeatedly in the past, is beautiful, wild and legendary, but also extremely severe… In short, climbing here implies a full alpine outing, having to deal with a complete mountaineering experience.

Mingolla teamed up with aspirant mountain guide Francesco Rigon in order to repeat Chimera Verticale, the route that scrambles up the huge pedestal to then ascend the magnificent 600m NW Face of Civetta. Established by Alessandro Baù, Daniele Geremia, Alessandro Beber and Luca Matteraglia between 2007 and 2009, Chimera Verticale was freed in a single day by the Austrians Charly Fritzer and Mathias Wurzer.

Setting off at 7:00am, Rigon led the first 8 pitches up the lower part of the climb, after which Mingolla took over and continued all the way to the summit, without ever falling. The duo completed their ascent at 18:30 before descending down to the hut, having hit the jackpot: with the 0 °C isotherm a 4700m, they climbed in t-shirts and used lightweight down jackets at the belays only.

Speaking of her ascent, Mingolla told planetmountain.com: "After the Fish route I knew I had to return to the Dolomites. I’d never climbed on Civetta before, but I’d heard a lot about Chimera Verticale and when Francesco suggested we give it a go, I immediately said yes. We left the Tissi hut at 5:00 am, at 5:40 we were at the base of the pedestal and we scrambled up this extremely carefully. We started climbing at 7 and Francesco led the first batch of 8 pitches, up to grade VII+, I then led the rest. It was never easy, and even seconding the lower section with the heavy backpack was difficult. In some respects the entire outing proved more demanding than the Fish route, since I’m not on form after the climbing expedition to Pakistan with the Ragni di Lecco mountaineering club."

Asked about the climb, Mingolla replied: "It's fantastic. I was struck by the corner, and the traverse left for 8, 9 meters, shuffling along a narrow rail with your hands, with no footholds worth mentioning. I thought about the first ascentionists, who didn’t know if they’d be able to make a belay and risked falling down into the corner. You need guts!"

In all likelihood this won’t be the last time we hear from Mingolla in the Dolomites this summer. “They’re absolutely beautiful, and there are so many things to do over here, it's very exciting. I should come here every year for at least a month!"