On 17 July 2016 Federica Mingolla became the first woman to lead the entire Via Attraverso il Pesce (Fish route) on the South Face of Marmolada, Dolomites. Her climbing partner was Roberto Conti.
Photo by OpenCircle 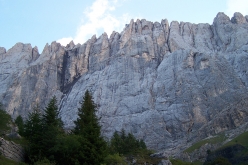 The magnificent south Face of the Marmolada, Dolomites
Photo by Planetmountain.com

Here she is, Federica Mingolla, climbing the almost 1000m route on Sunday 17 July 2016. The Italian climber is leading not any old vertical kilometer, but Via del Pesce, a.k.a. as the Fish route in English or Weg durch den Fisch in German, first ascended up the South Face of Marmolada in the Italian Dolomites in 1981 by the "Czechoslovakians" Igor Koller and Jindrich Sustr who, at the time, was a mere 17 years old.

The climb was first repeated in 1984 by Heinz Mariacher, Manolo, Luisa Iovane and Bruno Pederiva, while Mariacher and Pederiva returned in 1987 to make the first free ascent. In the years that followed the Fish route transformed into a legendary outing, making a name for itself well beyond the Dolomite massif, and until Mingolla’s ascent it had never been led all free by a woman.

Mingolla fell only once, not on the crux 7b+ pitch but on the tricky 6c that leads to the famous niche. Her ascent was documented live by OpenCircle’s Klaus Dell'Orto, Pietro Bagnara and Mirko Sotgiu.

RELATED NEWS
19/07/2016 - Federica Mingolla climbs the Marmolada Fish route: interview after the first female all-lead ascent
On Sunday, July 17, 2016 Italy’s Federica Mingolla made a free ascent of the famous Fish Route (Via Attraverso il Pesce) on the south face of Marmolada, Dolomites. She is probably the first women to lead the entire route free. The ascent was carried out, together with Roberto Conti, in 18 hours and 27 minutes.