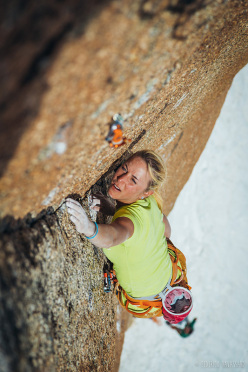 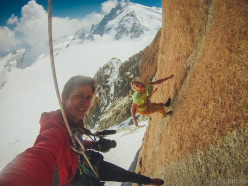 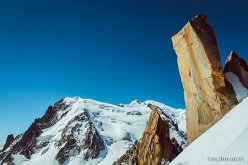 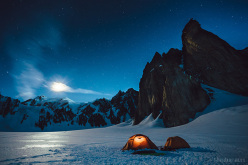 It all began one evening at the BSide climbing wall in Turin when, between one boulder problem and the next, Federica Mingolla approached me about Digital Crack and asked whether I wanted to join her as her photographer. She hadn’t even finished the sentence and I’d already spontaneously answered "yes". She was, after all, talking about one of the world's finest single pitches, located on the gigantic red granite monolith that juts out at almost 4000 meters on the Arête des Cosmiques, with the entire Mont Blanc massif acting as a backdrop.

The program seemed simple. I say seemed, because things turned out rather different: four days in total, of which two nights would be spent in a tent and one in the mountain hut; we'd climb two routes on the Tacul towers to acclimatise and get used to the climbing and this would be followed by the ski traverse to Aiguille du Midi where we’d then have a day and a half to decipher the moves on this quintessential altitude 8a.

It was with these good intentions that we met, early one morning at the start of summer, at the valley station of the Punta Helbronner cable car. With mountaineering boots on our feet, skis in hand, four giant rucksacks on our backs and much to the bemusement of the tourists who were excited to try the band new lift. Federica and I, both twenty years old, were joined by Lorenzo and Antonio, our slightly older guardians.

The next four days were a mix of highs and lows, a roller coaster ride of emotions condensed at altitude. The Dent de Geant at sunset for instance. Or Federica huffing and puffing, laybacking her way up the first routes because she’s always has a bad relationship with finger cracks, while with a shaky hand she tried all her Friends. How come the right one is always the last? The there was me, as I fainted at the belay due to low blood pressure, made fun of by Toni who then followed suit. The 7c section on Empire State Building stands out. As do our tents, crisp below the Grand Capucin, illuminated by the moonlight. Those first attempts on Digital, during which Fede received a series of blows that would have knocked out even the strongest boxer. The fatigue and cold, made up for by the beauty of the Bosson Glacier during the last rays of daylight. The astonished looks of the guides who passed along Arête des Cosmiques, on a day when it would have been better to stay at home rather than watch a blond girl lob off Digital, directly above their heads. In short, for us it really felt like being catapulted onto the stage of the stars. At the end of those four days although Digital had resisted the siege, trashing Fede’s skin and destroying her body in the process, she nevertheless managed to stack some odds in her favor: she had finally unravelled the sequence, she now "simply" needed to return after a few day’s rest.

The final act came quickly. On 1 July we returned to the Cosmiques, accompanied by Adri (Adriano Trombetta) who, despite his broken ribs, wanted to belay the "girl", as he calls Fede, and watch her dance up one of the most beautiful pieces of rock in Europe . We got out of the Midi cable car in perfect weather, the blue skies and sunshine making us climb in t-shirts where, only a few days earlier, our numb fingers contended the thermos in search of some warmth.

There is one particular moment that day that remains impressed upon my mind. Federica was on the successful redpoint, after waiting for the granite to cool down in the shade. She’d already done the bastard crux, passed the third quickdraw and the long reach up ridiculously small crimps. She was now climbing the distinctive thin crack that gave the route its name, in the background I could hear Adri screaming excitedly "send it girl" while I, just a few meters away on the static rope, tried to breathe as slowly as possible to avoid distracting her, mumbling "alè" in what sounded more like a prayer than incitement. The dream which had been the basis for all these efforts was coming true, taking shape in the form of the belay chain 40m above the Cosmiques ridge. A dream that had lasted for months, during which this smiling blonde had said goodbye to competitions and had begun to discover a new climbing dimension. After all, it's our dreams that make us progress, right?

Special thanks to those who helped out, namely Adriano Trombetta, Lorenzo Pernotti and Antonio Lovato Dassetto, as well as the sponsors who supported us during this adventure: Wild Climb, Petzl, Ferrino and Rock Slave.